The John McCain Russian saga keeps getting more bizarre. Sen. John McCain as a presidential candidate in 2008 directly and illegally propositioned Vitaly Churkin, the Russian ambassador to the United Nations, to donate to the McCain/Sarah Palin GOP ticket, according to documents released by Wikileaks.

Since the 2016 presidential election in Nov., Sen. McCain has accused Russia of hacking and meddling in U.S. politics and President Donald Trump’s successful campaign. But ironically it was McCain himself who forced Russia to interfere in the 2008 presidential campaign by asking the ambassador and Russian embassy for a campaign contribution.

Nonetheless, at the time of McCain’s presidential campaign, however, Churkin and the Russian government fired off a terse letter and official statement to the senior U.S. senator’s request for thousands in cash to his campaign.

“We have received a letter from Senator John McCain requesting financial contribution to his Presidential campaign.

In this connection we would like to reiterate that Russian officials, the Permanent Mission of the Russian Federation to the United Nations or the Russian Government do not finance political activity in foreign countries.”

Russian officials clearly understood that McCain’s request was not legal per U.S. law which forbids foreign governments from contributing money or assistance to presidential campaigns and U.S. presidential candidates from seeking foreign donations. Apparently McCain didn’t know this or simply ignored it before sending his Sept. 29th letter addressed directly and personally to Churkin at the Russian embassy on 67th Street in Manhattan.

McCain offered the Russians a chance to use any major credit card to donate $5,000 or even more. To be fair, McCain’s letter reads much like a normal campaign fundraising letter seeking contributions and likely would have gone unnoticed except that Churkin was compelled to release an official statement from the Russian government rebuking the request, which in part read:

“For Individuals – The first $28,500 will go to the RNC, the next portion will be divided evenly between the Michigan, Missouri, Ohio, and Pennsylvania state parties’ federal accounts up to a maximum of $9,250 for each Committee, and the final $2,300 will go to the Compliance Fund.”

The Russian response to McCain’s campaign which was leaked to and verified by Wikileaks is below and at Wikileaks. 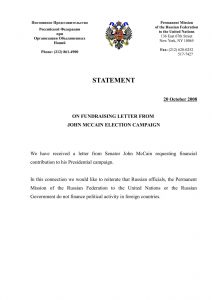 This could be the beginning of the end for embattled Sen. John McCain’s life in politics. According to White House officials, McCain is believed to have somehow gained access to the content of President Donald Trump’s private, classified telephone calls with world leaders. And he isn’t keeping quiet about what was talked about either.

An analysis of McCain’s recent public statements by White House officials, coupled with information from intelligence personnel working with the Trump administration, paints a disturbing picture for McCain — or any elected U.S. politician. Officials believe the senator has inside knowledge of a number of President Trump’s telephone conversations, including at least one conversation with Russian President Vladimir Putin.

Even more alarming, officials believe McCain is secretly sharing this sensitive information with colleagues and his cabal of friendly mainstream media journalists in a dangerous clandestine campaign to damage Trump’s presidency even before it has a chance to succeed. Trump has been searching for media rats in the Beltway in recent weeks. White House aides are confident they have now outed one of the major leaks plaguing the early days of the Trump presidency. To everyone’s surprise, it is a senior senator supposedly belonging to the same side of the political aisle as the president.

McCain has been lambasting Trump to anyone and everyone who will listen since the newly minted president’s inauguration. This includes a Russian comedian who pranked McCain posing as Ukraine Prime Minister Volodymyr Groysman. Even during that troubling conversation, where McCain shared sensitive U.S. intelligence with an imposter, White House aides said McCain unknowingly exposed himself as having inside knowledge of Trump’s telephone conversations.

“He has been given transcripts or actually listened to the calls and is sharing what he has heard,” an administration insider said. “There is no doubt. He is one of the major leaks.”

This audio recording of the phone call is absolutely incredible.

It’s time for Attorney General Jeff Sessions to determine the level McCain’s involvement and just how many laws he has broken.