The FBI’s use of “confidential human informants” to obtain information from Trump campaign officials under false pretenses was straight up spying, according to the CIA’s former head of counterintelligence, James Olson, a 30-year agency veteran who served under six presidents, and who once conducted an undercover overseas mission with his wife. 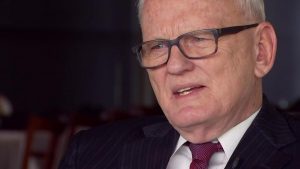 “It does sounds like spying,” said Olson in response to a question from the Hill.Tv‘s Saagar Enjeti. “spying can take many different forms and the art of spying has evolved.”

Olson spoke with Enjeti following a bombshell admission in the New York Times confirming that the FBI sent a government investigator to London in September 2016 to meet with Trump campaign adviser George Papadopoulos while posing as “Azra Turk” – assistant to another FBI spy, the well-paid Stefan Halper (who once oversaw a CIA operation to spy on Jimmy Carter on behalf of the Reagan campaign, under the direction of then-Vice-Presidential candidate George H.W. Bush).

Of note, Papadopoulos contends that “Azra Turk” is CIA, not FBI.

When asked about “Azra Turk,” Olson said “I think that person did misrepresent the purpose and was looking for information,” adding “Yeah, I’d call that spying.”

Attorney General William Barr set off a firestorm of debate last month during congressional testimony after he referred to the FBI’s activities against the 2016 Trump campaign as “spying,” a phrase he later defended during testimony last week – saying “I’m not going to abjure the use of the word ‘spying,” adding “I think spying is a good English word that, in fact, doesn’t have synonyms because it is the broadest word incorporating really all forms of covert intelligence collection.”

Of Olson’s time in the CIA, he told NBCDFW in 2017: “My career would really, I think, boil down to chasing Russians wherever there were Russians,” Olson said. “They were our number-one Cold War adversary, and my job was to monitor their activities, but above all, to recruit them as spies for us and then to handle them as spies for us, which I did on the streets of Moscow among other places.“