Glenn Greenwald: Russia Collusion ‘Conspiracy’ Was “Saddest Media Spectacle I Have Ever Seen”

Glenn Greenwald: Russia Collusion ‘Conspiracy’ Was “Saddest Media Spectacle I Have Ever Seen”

Offering one of the most scathing responses to the Mueller report summary released Sunday night, Glenn Greenwald, a Pulitzer Prize winning journalist and founding editor of the Intercept, appeared on Democracy Now! Monday, where he lambasted the mainstream press for helping to perpetuate the “total fraud” that was the Russia collusion narrative. Greenwald, who appeared on DN alongside former New York Times journalist David Cay Johnston, who argued the other side – that the Mueller report hasn’t satisfied questions of collusion or corruption – and that Trump remains a Russian “asset” (though he clarified that he didn’t believe Trump was an actual agent in the employ of Russian intelligence).

During a conversation where he compared Maddow to Judy Miller (The disgraced NYT journalist who spread misinformation on behalf of the Bush Administration during the run up to the Iraq War), Greenwald said the media’s spinning of Russia conspiracy theories wasn’t just incorrect, but also harmful.

“This is the saddest media spectacle I have ever seen since I began practicing journalism in 2005 and what makes it even sadder is to watch all the people who invested their journalistic credibility into what proved to be a complete and total fraud and scam continue to try and cling to some vestige of credibility by continuing to spin conspiracy theories that are even more reckless and more unhinged than those we’ve been subjected to for the past three years.”

The problem with propagating this narrative, Greenwald explained, is that it has helped inflame tensions between the US and Russia, putting both countries in a precarious position regarding the potential for a nuclear conflict. Saying that Trump is beholden to Russia would cut against Trump Administration policies that have actually been more aggressive than those of Trump’s predecessor.

That’s the tragedy of everything that just happened…all the things that do deserve attention and investigation have received none…because this idea drowning everything out has been a complete fairy tale…We have the answer…as for him being a Russian asset is it’s so irresponsible to say that because the reality is the conflict between the US and Russia has been higher than it has ever been in decades. How can you say Trump is a client of the Kremlin when he’s trying to oust one of Russia’s most important client states in Venezuela, or when he’s pressuring Angela Merkel to stop buying Russian natural gas?”

“Over and over the Trump Administration has taken actions that have been more aggressive than the Obama administration against the Kremlin.”

And while allegations of election hacking should absolutely be investigated, treating Russia’s interference as unprecedented and nefarious has transformed the US into a laughingstock internationally…because Washington has spent the last 70 years since WWII meddling in the politics of both its neighbours and other countries further afield.

“That any country would dare to interfere in our sacred and glorious democracy when the United States has done very little since the end of WWII but going around the world and interfering in every Democracy they can find…including Brazil the country in which I’m currently living…and even Russia. This doesn’t make it right for Russia to do it, but we’ve never kept it in perspective that meddling in other countries’ elections isn’t some grave never before seen drama…it’s part of regular business.”

“All of this outrage...has made the US a laughing stock to the hundreds of millions of people who live in countries where the US has done this and far, far worse.”

What’s worse, the Russia collusion investigation has distracted from other, more important, wrongs committed by Trump: Namely, the prosecution of Wikileaks and the ‘torture’ of Chelsea Manning.

The Trump Administration has made no secret of the fact that they want to prosecute Wikileaks for the crime in their eyes for disclosing confidential documents…one of the gravest threats we can imagine to press freedom. Chelsea Manning is being put back into solidarity confinement to torture her to say things about Wikileaks that aren’t true…”

“…I hope that gets way more attention.”

His comments during the interview echoed many of the same points Greenwald made during a series of tweets sent earlier Monday morning. 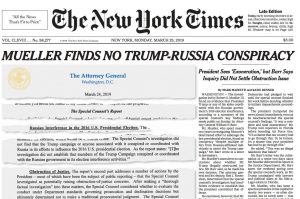