The reasons (fake news and lies) for the brutal murder of President JFK is contained in the below propaganda leaflet distributed by the Deep State just before the murder in Dallas, Texas.

JFK wanted to smash the “CIA into a thousand pieces” and withdraw from Vietnam, etc. JFK was fed up with the Bay of Pigs fiasco orchestrated by the US Military and the CIA. And after the horrendous debacle, the Chairman of the Joint Chief, submitted a plan to JFK for a second invasion of Cuba based on a false flag operation, known as “Operations Northwoods” using cuban exiles dressed up in Cuban military uniforms and “terrorist strikes” by a bombing campaign in Miami, Florida and blame it on Cuba. Google for yourself the details the dastardly plans of Operations Northwoods! 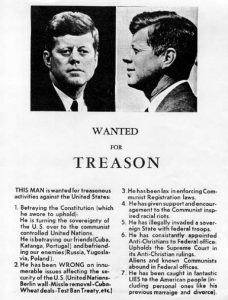 Former Obama CIA Director John Brennan Tweeting out his New Year message saying: “It is my sincere hope that the forthcoming exposure of your malfeasance & corruption will convince enough Republicans to abandon you in 2019. We have had enough of your whining from the White House. We need an actual leader—our Nation’s future is at stake”.

Disgraced and fired former Obama FBI Director James Comey Tweeting out his New Year message saying: “We must not accept or be numb to amoral leadership. Thankful for patriots across the political spectrum who are speaking out”.

And speaking for the Hollywood elite, documentary film maker Michael Moore declaring that his New Year wish for 2019 is to see “as many members of the Trump family in orange prison jumpsuits as possible”.

The reason, for the above lies etc published just before the New Year, was because President Trump ordered the unprecedented withdrawal of troops from Syria and Afghanistan (the longest war in the history of US military with no victory in sight). The mightiest arny cannot defeat the Taliban which is not even a state power, a mere resistance movement against foreign occupation.

Be advised, that If President Trump is murdered by rogue military elements of the Deep State, WWIII will commence, most likely in Ukraine, not in the South China Seas war theatre.