Trump Is Right – NATO Is Obsolete, And If Europe Wants To Fight Imaginary Enemies, It Should Pay Its Own WayI

Trump Is Right – NATO Is Obsolete, And If Europe Wants To Fight Imaginary Enemies, It Should Pay Its Own Way

Terrified by Trump, Eurocrats in Brussels over these past few days have conveyed to Asia Times, fears about the end of NATO, the end of the World Trade Organization, even the end of the EU.

Hysteria is at fever pitch. After the NATO summit in Brussels, the definitive Decline of the West has been declared a done deal as President Trump gets ready to meet President Putin in Helsinki.

It was Trump himself who stipulated that he wants to talk to Putin behind closed doors, face-to-face, without any aides and, in theory, spontaneously, after the preparatory meeting between Secretary of State Mike Pompeo and Russian Foreign Minister Sergey Lavrov was cancelled. The summit will take place at the early 19th century Presidential Palace in Helsinki, a former residence of Russian emperors.

As a preamble to Helsinki, Trump’s spectacular NATO blitzkrieg was a show for the ages; assorted “leaders” in Brussels simply didn’t know what hit them. Trump didn’t even bother to arrive on time for morning sessions dealing with the possible accession of Ukraine and Georgia. Diplomats confirmed to Asia Times that after Trump’s stinging “pay up or else” tirade, Ukraine and Georgia were asked to leave the room because what would be discussed was strictly an internal NATO issue.

Previewing the summit, Eurocrats indulged in interminable carping about “illiberalism” taking over, from Viktor Orban in Hungary to Sultan Erdogan in Turkey, as well as mourning the “destruction of European unity” (yes, it’s always Putin’s fault). Trump though would have none of it. The US President conflates the EU with NATO, interpreting the EU as a rival, just like China, but much weaker. As for the US “deal” with NATO, just like NAFTA, that’s a bad deal.

Trump is correct that without the US, NATO is “obsolete” – as in non-existent. So essentially what he did in Brussels laid bare the case for NATO as a protection racket, with Washington fully entitled to up the stakes for the “protection”.

But “protection” against what?

Since the dismemberment of Yugoslavia, when NATO was repositioned in its new role as humanitarian imperialist global Robocop, the alliance’s record is absolutely dismal.

That features miserably losing an endless war in Afghanistan against a bunch of Pashtun warriors armed with Kalashnikov replicas; turning functional Libya into a militia wasteland and headquarters for Europe-bound refugees; and having the NATO-Gulf Cooperation Council lose its bet on a galaxy of jihadis and crypto-jihadis in Syria spun as “moderate rebels”.

NATO has launched a new training, non-combat mission in Iraq; 15 years after Shock and Awe, Sunnis, Shi’ites, Yazidis and even Kurdish factions are not impressed.

Then there’s the NATO Readiness Initiative; the capacity of deploying 30 battalions, 30 battleships and 30 aircraft squadrons within 30 days (or less) by 2020. If not to wreak selected havoc across the Global South, this initiative is supposedly set up to deter “Russian aggression”.

So after dabbling with the Global War on Terror, NATO is essentially back to the original “threat”; the imminent Russian invasion of Western Europe – a ludicrous notion if there ever was one. The final statement in Brussels spells it out, with special emphasis on item 6 and item 7.

The combined GDP of all NATO members is 12 times that of Russia. And NATO’s defense spending is six times larger than Russia’s. Contrary to non-stop Polish and Baltic hysteria, Russia does not need to “invade” anything; what worries the Kremlin, in the long term, is the well being of ethnic Russians living in former Soviet republics.

Russia Can’t Be Both Threat And An Energy Partner

Trump has described the Nord Stream 2 pipeline as “inappropriate”, but his claim that Germany gets 70% of its energy (via natural gas imports) from Russia may be easily debunked. Germany gets at best 9% of its energy from Russia. In terms of Germany’s sources of energy, only 20% is natural gas. And less than 40% of natural gas in Germany comes from Russia. Germany is fast transitioning towards wind, solar, biomass and hydro energy, which made up 41% of the total in 2018. And the target is 50% by 2030.

Yet Trump does have a sterling point when, stressing that “Germany is a rich country”, he wants to know why America should “protect you against Russia” when energy deals are on the table. “Explain that! It can’t be explained!” as he reportedly said to Nato Secretary-general Jens Stoltenberg on Wednesday.

In the end, of course, it’s all about business. What Trump is really aiming at is for Germany to import US shale gas, three times more expensive than pipeline-delivered Russian gas.

The energy angle is directly linked to the never-ending 2% defense spending soap opera. Germany currently spends 1.2% of GDP on NATO. by 2024, it’s supposed to reach at best 1.5%. And that’s it. The majority of German voters, in fact, want US troops out.

So Trump’s demand for 4% of GDP on defense spending for all NATO members will never fly. The sales pitch should be seen for what it is: a tentative “invitation” for an increased EU and NATO shopping spree on US military hardware.

In a nutshell, the key factor remains that Trump’s Brussels blitzkrieg did make his case. Russia cannot be a “threat” and a reliable energy partner at the same time. As much as NATO poodles may be terrified of “Russian aggression”, the facts spell out they won’t put their money where their rhetorical hysteria is. 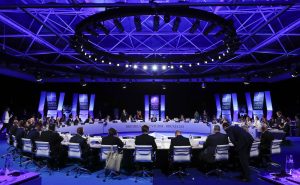 NATO (North Atlantic Treaty Organisation) foreign ministers attend a working dinner at the park of the Cinquantenaire during a NATO Summit in Brussels, on July 11, 2018.
NATO leaders gathered in Brussels on July 11 for a two-day summit to discuss Russia, Iraq and their mission in Afghanistan. / AFP PHOTO / POOL / YVES HERMAN

Foreign ministers attend a working dinner during the NATO Summit in Brussels on July 11, 2018. They gathered to discuss Russia, Iraq and their mission in Afghanistan. Photo: AFP/ pool/ Yves Herman

Are You Listening Now?

“Russian aggression” should be one of the top items discussed in Helsinki. In the – remote – possibility that Trump will strike a deal with Putin, NATO’s absurd raison d’etre would be even more exposed.

That’s not the US “deep-state” agenda, of course, thus the 24/7 demonization of the summit even before it happens. Moreover, for Trump, the transactional gambling man’s Make-America-Great-Again point of view, the ideal outcome would always be to get even more European weapons deals for the US industrial-military-intelligence complex.

Terrified by Trump, diplomats in Brussels over these past few days have conveyed to Asia Times fears about the end of NATO, the end of the World Trade Organization, even the end of the EU. But the fact remains that Europe is absolutely peripheral to the Big Picture.

In Losing Military Supremacy, his latest, groundbreaking book, crack Russian military-naval analyst Andrei Martyanov deconstructs in detail how, “the United States faces two nuclear and industrial superpowers, one of which fields a world-class armed forces. If the military-political, as opposed to merely economic, alliance between Russia and China is ever formalized – this will spell the final doom for the United States as a global power.”

The US deep state (its influential bureaucrats) may be wallowing in perpetual denial, but Trump – after many a closed-door meeting with Henry Kissinger – may have understood the suicidal “strategy” of Washington simultaneously antagonizing Russia and China.

Putin’s landmark March 1 speech, as Martyanov stresses, was an effort to “coerce America’s elites, if not into peace, at least into some form of sanity, given that they are currently completely detached from the geopolitical, military and economic realities of the newly emerging power configurations of the world”. These elites may not be listening, but Trump seems to indicate he is.

As for the NATO poodles, all they can do is watch.