A Recession Is Coming… And The Fed Can’t Stop It

A Recession Is Coming… And The Fed Can’t Stop It

Is the Fed ready for the next recession?

The answer is no.

Negative interest rates won’t save the day. Negative rates have been tried in Japan, the eurozone, Sweden and Switzerland, and the evidence is that they don’t work to stimulate the economy.

The idea of negative rates is that they’re an inducement to spend money; if you don’t spend it, the bank takes it from your account — the opposite of paying interest. Yet the evidence is that people save more with negative rates in order to meet their lifetime goals for retirement, health care, education, etc.

If the bank is taking money from your account, you have to save more to meet your goals. That slows down spending or what neo-Keynesians call aggregate demand. This is just one more example of how actual human behavior deviates from egghead theories.

The bottom line is that zero means zero. If a recession started tomorrow, the Fed could cut rates 1.75% before they hit zero. Then they would be out of bullets.

The problem is that the Fed never cleaned up the mess from QE1, 2 and 3, so their capacity to run QE4 is in doubt.

From 2008–2014, over the course of QE1, 2 and 3, the Fed grew its balance sheet from $800 billion to $4.4 trillion. That added $3.6 trillion of newly printed money, which the Fed used to purchase long-term assets in an effort to suppress interest rates across the yield curve.

The plan was that lower long-term interest rates would force investors into riskier assets such as stocks and real estate. Ben Bernanke called this manipulation the “portfolio channel” effect.

This theory was another failure by the eggheads.

The wealth effect never emerged, and the return of high leverage never returned in the U.S. either. (There is a lot more leverage overseas in emerging-market dollar-denominated debt, but that’s not what the Fed was hoping for. The EM dollar-debt bomb is another accident waiting to happen that I’ll explore in a future commentary.)

The only part of the Bernanke plan that worked was achieving higher asset values, but those values now look dangerously like bubbles waiting to burst. Thanks, Ben.

That makes it highly problematic for the Fed to start QE4. When they started QE1 in 2008, the balance sheet was $800 billion. If they started a new QE program today, the they would be starting from a much higher base.

The question is whether the Fed could take their balance sheet to $5 trillion or $6 trillion in the course of QE4 or QE5?

In answering that question, it helps to bear in mind the Fed only has $40 billion in capital. With current assets of $4.4 billion, the Fed is leveraged 110-to-1. That’s enough leverage to make Bernie Madoff blush.

To be fair to the Fed, their leverage would be much lower if their gold certificates issued by the Treasury were marked to market. That’s a story for another day, but it does say something significant about the future role of gold in the monetary system.

Modern Monetary Theory (MMT) led by left-wing academics like Stephanie Kelton see no problem with the Fed printing as much money as it wants to monetize Treasury debt. MMT is almost certainly incorrect about this.

There’s an invisible confidence boundary where everyday Americans will suddenly lose confidence in Fed liabilities (aka “dollars”) in a hypersynchronous phase transition. No one knows exactly where the boundary is, but no one wants to find out the hard way.

It’s out there, possibly at the $5 trillion level. The Fed seems to agree (although they won’t say so). Otherwise they would not be trying to reduce their balance sheet today.

What can the Fed do?

All they can do is raise rates (slowly), reduce the balance sheet (slowly) and pray that a recession does not hit before they get things back to “normal,” probably around 2021. What are the odds of the Fed being able to pull this off before the next recession hits?

Have a look at the chart below. It shows the length of all economic expansions since the end of World War II. 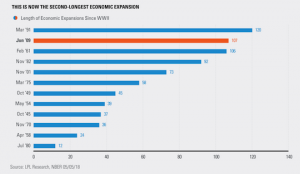 The current expansion is shown with the orange bar. It started in June 2009 and has continued until today. It is the second-longest expansion since 1945, currently at 107 months. It is longer than the Reagan-Bush expansion of 1982–90.

In short, there’s a very high probability that the U.S. economy will go into recession before the Fed is prepared to get us out of it.

That means once the recession starts, the U.S. may stay in the situation for decades, which is exactly what happened to Japan beginning in 1990. By the way, Japan’s most recent GDP report for the first quarter of 2018 showed negative growth. Japan has had three “lost decades.” The U.S. is just finishing its first lost decade and may have two more to go.

The situation is even worse than this dire forecast suggests. The reason is that by preparing to fight the next recession, the Fed may actually cause the recession they’re preparing to cure. It’s like trying to run a marathon while being chased by a hungry bear.

This is the ultimate monetary finesse. This mess was caused by Bernanke’s failure to raise rates in 2010 and 2011 when the economy was in the early stages of an expansion and in a better position to absorb rate hikes. It was also caused by Bernanke’s insistence on QE2 and QE3 despite zero evidence then or now that it does any good. (QE1 was actually needed to deal with a liquidity crisis, but that was over in 2009. There’s no excuse for what came later.)

A recession is coming, the Fed is unprepared and it’s extremely unlikely the Fed will be prepared in time.

The Fed may not be ready, but you can be. This is a time to reduce your exposure to risky assets such as stocks, increase your allocation to safe assets such as cash and allocate 10% of your portfolio to gold and silver as insurance against a collapse scenario much worse than a recession.

The only other recommendation is to do what the Fed is doing… pray.