America Loses When The Trade War Becomes A Currency War

America Loses When The Trade War Becomes A Currency War 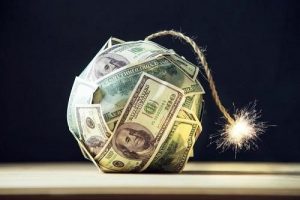 There has been a longstanding narrative in economic circles that no matter what crisis occurs the U.S. dollar is essentially invincible.

I have never been one to buy into this assumption.

Reason 1: Because I remember distinctly just before the derivatives and credit crisis in 2007/2008 the majority of mainstream economists were so certain that U.S. housing and debt markets were invincible, and they were terribly wrong. Whenever the mainstream financial media are confident of an outcome, expect the opposite to happen.

Reason 2: Because karma has a way of crushing grand illusions. When you proudly declare a Titanic “unsinkable,” nature or fate often tests that resolve and finds it wanting.

Reason 3: Because I understand that a primary goal of the internationalist, globalist, anti-sovereignty and New World Order crowd is to diminish U.S. economic performance dramatically, and this includes ending the reserve status and petro-status of the dollar in order to make way for a single global currency unit dictated by a single global economic administrator.

Mindless blind faith in the dollar (and U.S. treasury debt) seems to switch sides politically according to whose narrative it best suits.

During the Obama administration, conservatives and Republicans witnessed unprecedented fiat currency creation and dollar devaluation by the Federal Reserve and rightly drew the conclusion that this would eventually trigger a currency crisis as various systems absorb and then regurgitate all these dollars back into the U.S. We saw the biggest foreign trading partners of the U.S. launching bilateral trade agreements that cut out the dollar as the reserve currency, and we witnessed many foreign creditors questioning the viability of U.S. debt.

Only a couple of years ago, conservatives were warning of potential disaster for the dollar caused by the bailouts and unchecked stimulus programs while leftists were staunchly defending the dollar as an immortal golden goose. Today, the roles appear to be switching, as many conservatives now defend “king dollar” in the wake of a Trump presidency, and adopt numerous arguments once reserved for ignorant lefty commentators.

One question that needs to be addressed is how long the current trade war will last? Some people claim that economic hostilities will be short-lived, that foreign trading partners will quickly capitulate to the Trump administration’s demands and that any retaliation against tariffs will be meager and inconsequential. If this is the case and the trade war moves quickly, then I would agree — very little damage will be done to the U.S. economy beyond what has already been done by the Federal Reserve.

However, what if it doesn’t end quickly? What if the trade war drags on for the rest of Trump’s first term? What if it bleeds over into a second term or into the regime of a new president in 2020? This is exactly what I expect to happen, and the reason why I predict this will be the case rests on the opportunities such a drawn out trade war will provide for the globalists.

In my article World War III Will Be An Economic War, I reiterated my longstanding view that there is indeed a global war brewing between major powers, but that this war will be fought primarily with financial weapons, not nukes. I also summarized my position that this war will be engineered by globalists deliberately to provide cover for something they call the “great economic reset.”

With Trump’s cabinet currently loaded with banking elites and neoconservatives with ties to institutions like Goldman Sachs and the Council On Foreign Relations, institutions notorious for promoting one-world economic and political programs, it seems to me that the worst case scenario for the U.S. could easily be staged. If the goal is to kill the dollar’s reserve status, then the trade war will be purposely prolonged.

The next question that needs to be addressed is how is the dollar actually vulnerable to destabilization?

Pro-dollar cheerleaders will say that the dollar is in high demand, with countries like India begging the Fed to stop balance sheet cuts for fear that this will reduce the amount of dollars and dollar denominated assets in circulation in emerging markets.

I see this as a gross misinterpretation of what India and others are warning about. Interestingly, foreign central banks are now sounding an alarm many of us in the alternative economic field have been sounding for years. When India’s Reserve Bank Governor, Urjit Patel, writes about the danger of speedy balance sheet cuts by the Fed causing a liquidity crisis in global markets, this is not necessarily a declaration that India has a insatiable desire for more dollars. What it is a declaration of is the fact that the global economy is weakened by its dependency on the dollar as the primary international trade mechanism.

Emerging markets and much of the world have been propped up for the better part of a decade through Federal Reserve stimulus measures, from direct bailouts to near zero interest rate loans to asset purchases to outright stock market manipulation. The dollar has become a drug easing the pain of economic downturn, and many nations are addicted.

So what happens when the drug dealer, for whatever reason, suddenly stops providing the drug? The addict is going to look elsewhere for a fix.

The Fed is NOT going to stop its balance sheet cuts, and it’s not going to stop interest rate hikes. Not with the current discussion on “inflation dangers.” This will ultimately cause declines in various markets including equities, and I believe these declines will accelerate by the end of 2018. Meaning, liquidity in foreign trade and markets will have to be facilitated by other sources, such as the International Monetary Fund’s (IMF) basket currency system, or the application of a new global cryptocurrency system, which the IMF has been avidly studying.

The IMF has even been singing the praises of crypto-currencies recently, even depicting them as the next stage in human evolution and perpetuation the lie that cyrpto is “anonymous.”

The dollar is vulnerable to destabilization by the very institutions and elitists that created it in the first place, and these people are seeking something much bigger than king dollar. The problem is, the globalists cannot implement such a vast ‘reset’ in the economy without a considerable distraction. Enter Trump’s trade war…

I have been outlining the reality behind dollar weakness for quite some time. Rehashing the facts over and over again becomes tiresome but is unfortunately necessary, because there is always some new contingent of the public that falls into the trap of dollar worship. So, let’s do this one more time.

First, the dollar is NOT backed by U.S. military might. The U.S. military can barely manage its concerns in the Middle East, let alone take on nations like Russia or China in an attempt to force them to keep investing in U.S. treasury debt or retain the dollar as world reserve. If these countries drop the dollar, there is nothing the U.S. can do. Anyone who makes the dollar-by-military argument should not be taken seriously.

Second, while the dollar is in demand now, this is only because the current system has been propped up by endless Federal Reserve stimulus.  If the Fed continues to cut assets and raise interest rates, then emerging markets and others will look elsewhere for support. The dollar is only valuable to global markets so long as the Fed continues to provide a perpetual supply of liquidity. Economies are fickle, and welfare recipients are even more so. Stop giving people free goodies and they will abandon you angrily.

Major foreign economies like China and parts of Europe have been adopting bilateral trade relations for some time. Rather than intimidating these countries into capitulation, a trade war on the part of the U.S. is far more likely to drive them more closely together. Germany and China in particular have been establishing strong trade ties, and OPEC nations have been much cozier with the East. The idea that the U.S. is somehow a linchpin to the entire global economy is a lie. The world can and will organize trade avenues without us if pushed. In fact, this seems to be the plan.

The U.S. has only two major points of leverage in a trade war.

U.S. consumers and corporate buyers are sitting at historically high debt levels. In fact, their debt levels are higher than they were just before the crash of 2008. As the Fed continues to raise interest rates, this debt will become unsustainable and something will have to give. For corporations, this means job cuts and wage reductions. For consumers this means cuts to household spending. U.S. consumers are only a point of leverage in a trade war so long as they continue to consume at ever expanding rates. If we suffer another crash similar to 2008, foreign creditors will see this as a lack of incentive to continue placating the U.S.

Without a massive resurrection of American manufacturing and production, we enter into a trade war with little ammunition because we remain dependent on foreign production and goods, while other nations like China can easily expand into alternative markets and retain their own production capabilities. Trump could have launched a new renaissance of production in the U.S. if he had given corporations incentive to bring manufacturing back home. Instead, he gave them a sizeable tax cut without asking for anything in return. Those tax cuts, instead of creating jobs or luring factories back to the U.S., have instead been spent where we all knew they would be spent — on stock buybacks to prop up a flailing equities market.

The longer the trade war continues, the more other countries will consider the “nuclear option” of dumping the dollar as world reserve, or dumping U.S. debt. In my view, this is exactly what the globalists want. Trump bumbles into a trade war and is blamed for a crisis in the dollar as well as a crash in stock markets, while the banking elites introduce their new world order reset as a solution. In this case, I think the worst case scenario is the intended scenario.