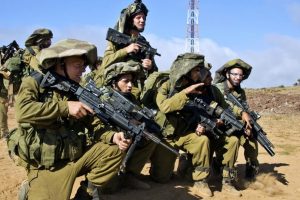 A new Meir Amit Intelligence and Terrorism Information Center report says that ISIS and Israel are temporary allies against Iran.

A new report suggests that in the area of countering Iran’s presence in Syria, ISIS and Israel’s interests may converge, which in a way makes them allies. Despite suggesting no formal alliance between ISIS and Israel, an IDF affiliated think tank Meir Amit Intelligence and Terrorism Information Center reports that interests of both ISIS and Israel align, making them allies against Iran.

Regarding ISIS, the report says it, “will likely change its combat patterns and revert to guerrilla tactics and terrorism following the end of the campaign against it in Iraq, and may carry out hit-and-run attacks against Iranian vehicles moving along the land corridor (Iranian vehicles may be perceived as attractive targets for ISIS in its new incarnation).”

Iran’s intervention in Syria “fans the flames of conflict with ISIS, which retains significant operational capabilities even after the collapse of the Islamic States.” In addition, the report says, “We assess that Iran and the militias under their patronage will struggle to provide an adequate response to this terrorism challenge.”

It continues: “The Iranian presence in Syria increases the likelihood of friction with Israel and may lead to an escalation between the two countries at a timing that is not suitable for Iran.” It says this in light of numerous reports of Israeli airstrikes in Syria, some reportedly close to Damascus, against Iranian weapons transfers to Hezbollah.

The report describes Iran’s goals as: “Bolstering the pressure mechanisms and escalating the threat posed to Israel, while creating a state of deterrence. This is mainly by augmenting the military capabilities of Hezbollah, developing the abilities of Hezbollah to manufacture weapons, and establishing local terror networks in the Golan Heights, with the aim of creating a new front for challenging Israel.”

Now that ISIS is no longer an invasion threat to Israel, Israel can now unambiguously view ISIS attacks on Iran and Iranian proxies as beneficial, which isn’t without precedent. Top Israeli military officials previously spoke among those lines, with Defense Minister Moshe Ya’alon saying that Iran was worse than ISIS and would rather deal with the Caliphate than with Tehran in early 2016.