Petroyuan And Saudi Arabia: From The Temptation Of The US “Military QE” To The Creation Of A Middle East 3.0

Petroyuan And Saudi Arabia: From The Temptation Of The US “Military QE” To The Creation Of A Middle East 3.0

End 2017/early 2018, all major Western Central Banks will be putting a final stop to the 2008 crisis-related unconventional monetary policies, namely the famous quantitative easing policies (QEs) which enabled to provide liquidity to those banks which saw their mutual confidence for borrowing collapse in the aftermath of the subprime crisis.

The European Central Bank, the Bank of England and the Bank of Japan are all approaching a slowdown in bond buyback. In Europe, Draghi has repeated it over and over again[1]: the Central Bank cannot do everything and therefore structural reforms of the euro are urgently needed. This is the context is which the term of “fiscal QE”[2] was coined, aimed at allowing the financing of infrastructure via a strengthening of fiscal policies at European level, something which would serve the real economy and would logically consolidate the Juncker investment plan[3].

The announced policy of the Bank of Japan follows roughly a similar strategy, except that it does not need to consolidate the governance of its own currency as a prerequisite. Recently, Shinzo Abe’s electoral victory provided the necessary conditions to initiate the transition period of buyback and debt amount decrease (200% of their GDP) through enhanced fiscal policies [4].

Military QE In The Others

As for the BoE, it hasn’t yet announced the end of the tightening of its monetary policy, but due to the inflation problems currently faced (3% despite a rise in interest rates), it should not be long in coming[5]. Probably tax policy is not an option for the United Kingdom, whose inhabitants experience significant debt problems[6]. So, is it also likely to engage in a convincing military QE? Or will Europe ultimately be the only last resort solution?

On the US side, things are a bit different: the Fed ended its QE three years ago already and, since then, it had simply maintained its stock by reinvesting the amounts of maturing bonds into new bonds[7]. However, since October, this has come to an end too and the Fed has started to diminish the bond stock it had acquired in order to support the economy. Basically, this decrease requires to:

1) “Cancel” the currency entries created on the accounts of the banks (as regards to the pure monetary creation part);

2) Find real customers for the issues or renewals of treasury bills, now that the Fed no longer plays this role. There is a problem though: in our multipolar and ultra-competitive world, how to create strong positive attraction differential in favour of the American economy?

Treasury bills could be sold to the US citizens, but they would need savings to do so, which is still not the case… On the contrary, we note a new increase in US household indebtedness and delinquencies[8]. This situation proves two things: a tax policy is no more conceivable than the sale of T-Bonds to Americans, and there is no time to lose to avoid a second subprime crisis.

This second point also shows that the strategy of reviving the economy by weakening the dollar (and therefore increasing imported products prices) is a far too longstanding policy.

Does the US have any potentially highly profitable business other than their famous military-industrial complex? Not much in fact, at least not much that isn’t already optimised. Depending on what is included in the military budget, this business represents between 700 and 1000 billion dollars a year[9]… 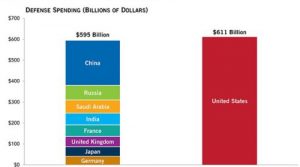 This is how our team came up with the concept of “military QE”, echoing the European “fiscal QE”. The question then becomes:  how could the United States quickly and significantly optimise the profitability of this part of their economy?!

Weaknesses: by increasing their contributions, the allies regain control over command functions which is a bore for the US almightiness on their Alliances (ex: Europe with NATO or, on the contrary, South Korea, whose new government is extremely reluctant to pay bills for unwanted services); it pays, but it also costs a lot. Even if the allies contribute better to the budget, if the total budget increases, the US share also increases; if no one manages to restore order, there are also real conflagration risks which are not part of the US military objective: cost issue, transparency issues on comparative advantages, disastrous image leading to the implementation of decoupling strategies from the American “ally”.

Weakness: the world could turn into a very dangerous place, which ultimately is not in anyone’s interest. No modern leader can ignore globalisation – not economic globalisation, but societal one, where what happens here has immediate consequences there.

Weakness: even if conditions of deployment of the global arms market are more secure, the world can still become a dangerous place in the longer run…. unless the evolution goes hand in hand with the establishment of a new multipolar governance; one which could anchor the partners’ confidence in military systems focused on defence instead of attack (from ministries of war to ministries of defence, from missiles to shields).

Let us carry a little mental exercise … The country cannot afford to maintain its 800 military bases abroad, the cost of which goes up to $160 billion a year[12]. 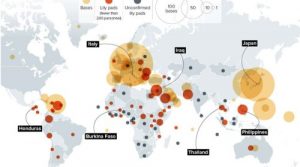 If the United States abandoned half of their bases abroad, the amount saved would be around $65 billion a year[13]. On the other hand, in a multipolar world where peace is ensured by the balance of powers, the need for armament is still huge. For example, Japan is remilitarising rapidly[14]. US arms exportations could therefore be considerably strengthened. If they increase for example by 50%, this would mean around 25 billion additional income[15], i.e. $90 billion a year in savings or profits. If we take into account the large increase in next year’s military budget desired by Trump and voted almost unanimously by the Congress[16], we reach a “stimulus” of about $150 billion a year. Here it is, the new QE: it is a “Military QE” in the sense that, more than ever, the military expenses massively support the economy. The amounts involved are obviously much smaller than those of the Fed’s QE, but allow us to remind that such support is far more impactful on the real economy than virtual entries on bank accounts.

As a matter of fact, the first signs of the replacement of the petrodollar by the “military QE” we have just described seem already visible: for example, the US arms exports to Saudi Arabia increased in 2016, at the precise moment from US oil imports from this country fell sharply[17], thus rebalancing the US-Saudi trade in favour of the former. Given the trade balances that the United States has accustomed us to in the past decades, this kind of tiny fact can easily be interpreted as a real change of trend and the beginning of the famous US “economic landing” we have been anticipating in the past months and that the country needs so badly to reduce its financial infusions and start walking alone again…