[FF Editorial: Now that Israel has confirmed that Saudi Arabia has established a “secret” relationship, will Muslims all over the world condemn the Wahhabist Saudis and their betrayal of the Palestinian people? For too long, Muslims especially Sunnis have unreservedly and slavishly followed the insidious religious line of the moribund Kingdom, a creature and construct of British Imperialism from way back in 1916 as a result of the Sykes-Picot agreement dividing the entire Middle East between France and the United Kingdom (UK).

The Saudis claiming leadership of the Sunnis have the audacity to condemn the heroic resistance of the Iranian Shias, alone since their Islamic revolution, in facing the Zionist Anglo-American attempts to undermine, subvert their struggle for independence and sovereignty. The Saudis having been defeated in Syria and exposed as the financiers of ISIS and the affiliates of Al Qaeda, inciting Muslims to kill Muslims, are now on a new agenda to destroy Iran in collusion with the Zionists.

Rest assured that the Saudis will be defeated if they dare venture down that treasonous road. Likewise, the Saudis’ allies in Malaysia hidden in plain sight within the corrupt Najib regime will also be defeated. There is time yet for the Muslims who have been misled to repent and make amends. Should they fail to do so, they must be prepared for judgment day.]

Yet more confirmation emerged today regarding the recently established relationship between Israel and Saudi Arabia, which is being defined by a shared desire to see Iranian influence and expansion rolled back in the Middle East. For the first time a high level Israeli government official has formally acknowledged the increased ties between the two countries which have historically been bitter enemies, and which have never had official diplomatic relations.

The historic news, which is worrisome for the fact that it could bring the region closer to major war as the newfound “allies” eye the Iranian proxy Hezbollah, follows the leak of an Israeli diplomatic cable sent to all Israeli embassies throughout the world which revealed Israeli and Saudi behind the scenes coordination. The cable gave instructions to Israeli diplomats to express support for the Saudi war against Shia forces in Yemen and also urged embassies to aggressively lobby their host governments to take steps toward pushing Hezbollah out of Lebanon. 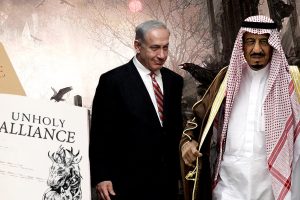 And today the Times of Israel reports the following Reuters story under the bombshell headline, Israel Has Secret Contacts With Saudi Arabia, Senior Minister Reveals:

Energy Minister Yuval Steinitz said on Sunday that Israel has had covert contacts with Saudi Arabia amid common concerns over Iran, a first disclosure by a senior Israeli official of such contacts. In an interview on Army Radio, Steinitz was asked why Israel was hiding its ties with Saudi Arabia, which does not have diplomatic ties with Israel.

And in response Steinitz replied in the affirmative, explaining that:

“We have ties that are indeed partly covert with many Muslim and Arab countries, and usually (we are) the party that is not ashamed. It’s the other side that is interested in keeping the ties quiet. With us, usually, there is no problem, but we respect the other side’s wish, when ties are developing, whether it’s with Saudi Arabia or with other Arab countries or other Muslim countries, and there is much more … (but) we keep it secret.”

The official confirmation follows closely on the heels of an unprecedented interview that Israel Defense Force (IDF) chief-of-staff Lt. Gen. Gadi Eizenkot gave to a prominent Saudi newspaper last Thursday in which he said that, “Israel is ready to share intelligence with Riyadh on their shared arch-foe Iran.” Eizenkot explained further, according to Tel Aviv based i24NEWS, that “Israel and Riyadh – which he noted have never fought one another – are in complete agreement about Iran’s intentions to dominate the Middle East.”

In early September we broke the story that no less than Saudi Crown Prince Mohammad bin Salman (MBS) may have been among a Saudi delegation which secretly visited Israel at the time. This was based on an Israeli state funded radio broadcast (Kol Yisrael), which made cryptic reference to the “secret” visit while withholding names and specifics. “An emir of the Saudi royal court visited the country secretly in recent days and discussed with senior Israeli officials the idea of advancing regional peace,” the station reported.

As knowledge of the Saudi-Israeli ties are becoming public knowledge, this could certainly result in embarrassment for both countries, especially on the Saudi domestic front. As the Israeli Energy Minister said today, “It’s the other side that is interested in keeping the ties quiet.”

Could news of official ties with the Jewish state be recipe for more internal unrest to come in Saudi Arabia? No doubt, the kingdom’s radical Wahhabi religious establishment will have much to say on the issue. This is perhaps why MBS has reportedly continued his unrelenting and broadening crackdown.