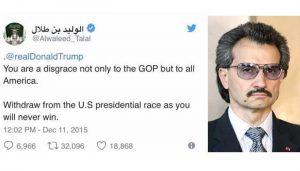 Why does he hate Trump so much as he is not even a US citizen and why was he so confident that Trump would not win the US Presidential Elections? Why was he, together with Prince Bandar (Head of Saudi Intelligence and former Ambassador to US) aligned with the Bush crime family?

This commentary is extracted from a variety of sources.