Meet The Jew Who Wants America To Bomb North Korea

Meet The Jew Who Wants America To Bomb North Korea 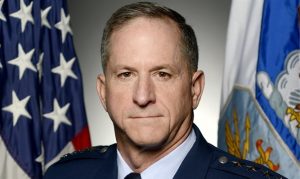 Of all the Jews in the world, the one who controls the greatest firepower is not necessarily Binyamin Netanyahu or the current commander of Israel’s Air Force. It appears the distinction is held by the Chief of Staff of the US Air Force,General David Goldfein.

Goldfein is the second Jew to hold the high position, and the first to have been a fighter pilot previously.

The first Jew to hold the high post was General Norton Schwartz, who commanded the force between 2008-2012. Schwartz was a helicopter and transport aircraft pilot.

The United States media has been quoting Goldfein for the past 24 hours because US heavy bombers armed with nuclear warheads are preparing for a 24-hour alert on the backdrop of tensions with North Korea. This means that all 76 B52 planes will be ready to take off at any moment for bomb missions.

Before his appointment as Chief of Staff of the Air Force, Goldfein served as assistant to the Chairman of the Joint Chiefs of Staff.

Goldfein was commissioned as an officer in 1983 and since then has held various senior command positions in the US Air Force on US soil and in Europe, and took part in the 1991 Gulf War. During the war in Bosnia he served as commander of the 555th Fighter Squadron, and led his unit as an F-16 pilot. His plane was shot down by an anti-aircraft battery on May 2, 1999 over western Serbia, but it was rescued by a NATO helicopter before enemy troops managed to locate it.

Goldfein has the rank of Command Pilot, the highest ranking in the US Air Force, awarded to those who have accumulated at least 15 years of flight experience with 3,000 hours of flying.

…Now WAAAAAAIIIITTT a minute here….Why, just a few weeks go, Jews of every conceivable stripe, skin, scale, whatever–spent the last shekel of whatever existed of their collective sanity over a piece written by former CIA counter terrorism expert Phil Giraldi where he asserted that American Jews are driving America into wars that are not in her interest. In addition to all the Judaic screeching, he was fired by the cowards at the American Conservative, even though he made his case intelligently, reasonably, and factually.

And yet, here we have an ISRAELI website, the Jewiest authority out there, asserting (quite proudly, no doubt) that this ‘American’ Jew wants to get a war started with North Korea. Where are the ADL, JDL, WJC, and all the other Judaic hounds of hell nipping at their heels and growling in their face over this?

They won’t because what Giraldi said was true, and they know it, but will not admit it openly, for the simple fact that–just as immutable as are the laws governing gravity– ‘fish swim, birds fly, and Jews lie’

When a Gentile says Jews encourage wars for America to go fight in, then he’s labeled an anti-semite. But, when Jews acknowledge the same in their own newspapers, in fact are basically bragging about it, well, then everything is …kosher!

Now think about this for a moment folks. What kind of people would even write such a statement?  If I had become a general in the Air Force and was in his position, and had made myself known in Norway as an American Air Force officer with Norwegian roots, do you really think the Norwegians would print such an article and link themselves to a war by reason of ethnicity? You know, “Meet The Norwegian Who May Bomb North Korea.” And I’m just picking on myself and the Norwegians as an example, it could be anyone, the Mexicans, the Columbians or some Asian, doesn’t matter. Only the Jews would want to take credit for “one of their own” getting ready to start a war. What is wrong with these people?