The Revolution Of The 9th Of Av – Understanding Zionist Jews

The Revolution Of The 9th Of Av – Understanding Zionist Jews 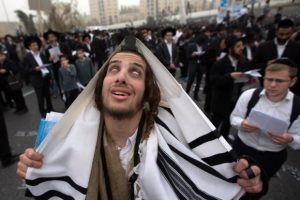 The normal dynamic of life is totally undermined by the experience of Tisha B’Av which in Rabbinic tradition became an unending experience.

[UglyTruth Editorial: As we say here on a daily basis, one cannot understand the geo-political dynamic existing in today’s world vis a vis Israel, Zionism, and organized Jewish interests without first understanding the fact that everything –EVERYTHING – goes back to that seminal event taking place in the 1st century with Rome’s destruction of Jerusalem, Judea, and the Temple.

Please note those sections underlined and slanted and plug them into the mathematics of everything taking place today, and particularly with regards to Trump’s drive to impose a ‘Pax Americana’ upon the Middle East in the same manner as Rome imposed the Pax Romana.]

In short, the only thing that really holds Jews together is a belief that everyone is out to get them so that becomes their reason to behave badly; then when they do, people naturally push back and retaliate against them thus fulfilling the Jews’ earlier premises about “persecution.”  When the Jews were behaving Very badly 2000 years ago which eventually kept building up to the point where the Roman Empire had no choice but to go into Judea 1947 years ago and level their 2nd Temple in 70 AD, that was a turning point, a point of inflection, for the Jews that put them on this path to re-conquer the Roman Empire [us, we Americans and Europeans] and destroy it, this is their primary motivation today for all the sh** that they do. Whether its getting us into all these wars, working to pass the Immigration Reform Act of 1965–which is why we have open borders today, working in a latent way to give us abortion on demand, porn on demand, overt sexuality in public life as a moral ideal and now even “gay marriage” where no fewer than 13 Jewish organizations filed Friends of the Court Petitions with the SCOTUS advocating for it, their control over the JMSM and the finances of the world, this is what it all comes down to–Revenge for destroying their stupid temple where they performed sacrifices and asserted their self-proclaimed supremacy as Yahweh’s chosen people. They damn all other people, they damn this world and they even damn Existence; but never once do they ever question their own code of behavior.

It’s like this. Suppose you had a real dirtbag of a neighbor. He’d steal your tools when your not home, diddle and rape your kids, girls and boys alike, the same for your wife, killed your dog, killed and ate your cat, burned the dog house down since you no longer had a dog, sh** on your front yard, break the glass windows on your house and stole your car and went joy riding in it and then set it on fire.  If one went over there and beat the sh** out of him to the point where he is barely alive and you basically say, “leave or I’m going to kill you,” most people would realize that they had done something wrong when their crimes are laid out before them and they are one blow away from death and they come to their senses at least just enough to realize they need to change their ways. Not so for Jews. For them, in their twisted, bass-akwards, FUBAR’d “religion” of Judaism, getting the sh** beat out of them is their validation that their belief system is right, is good, is moral and correct.

This is what we’re up against people. A nuclear-armed insane asylum where evil is perceived as good.  And BTW, it will not serve you well  to “treat them with love,” geopolitically as they will only interpret that as a moral weakness and abuse you more.]

From a philosophical and psychological perspective, Tisha B’Av (Fast of the 9th of Av) became the most significant Jewish observance over the past two millennia. Tisha B’Av revolutionized the status quo of life, and turned our experience of time on its head.

In the normal experience of time, each day, week or month is viewed as predominantly a positive experience in which one desires to continue and partake in what life has to offer. On occasion, a tragic event or interlude interrupts this flow of time and the individual pauses to absorb the tragedy, live through it, and then regain his previous life.

This normal dynamic of life has been totally undermined by the experience of Tisha B’Av which in Rabbinic tradition became an unending experience. Jews feel or should feel a sense of loss which is impossible to be fully healed. Thus, normal life could never be retrieved. In a sense, that loss should be greater than a personal tragedy of death, for even in the experience of losing a loved one, there is law which forbids us to grieve too much. One should not presume to love the deceased more than God.

There is, however, no such application of not grieving too much to the experience of Tisha B’Av. The sense of irredeemable loss becomes part of our normal experience. That continues to be so, until the appearance of the Messiah.

The underlying foundation of this loss is expressed or demonstrated in the process of mourning. The Talmud states, “All the restrictions that apply to a mourner, also apply to Tisha B’Av. It is prohibited to eat and drink and to anoint, and to put on leather footwear, and to engage in marital relations.” Taanit, 30a. The Braita also includes any form of Jewish study which could bring about pleasure or joy.

Although, as the commentaries note, the Braita is imprecise. A mourner is not forbidden to eat and drink, and there is no mention of the prohibition of washing, which applies both to a mourner and to Tisha B’Av. Nevertheless, the dominant aspect of mourning applies to both.

The underlying principle behind the correlation of Avelut (mourning) and Tisha B’Av is the realization that without the Temple, Jews live incomplete and unfulfilled lives. Its absence creates a deep hole or vacuum in Jewish life. This loss, however, is emphasized on a deeper level when the Talmud establishes a connection between Tisha B’Av and Yom HaKippurim.

There is no distinction between Tisha B’Av and Yom HaKippurim except that when doubt occurs, it is prohibited on one and permitted on the other. In every other way, they are both equal. Pesachim 54b.

The issue of doubt refers to a situation where there is uncertainty as to what the specific date of either of these occasions is. On Yom HaKippurim, two continuous days must be observed, while on Tisha B’Av, only one day. That is because Yom HaKippurim is a Torah holiday, while Tisha B’Av is a Rabbinic holiday.

It is clear, however, that the issue of mourning plays no role whatsoever in the observance of Yom HaKippurim. There is no requirement to sit low to the ground, or any restrictions upon what Jewish texts can be learned and no restrictions on mutual greeting. What does remain, however, is a sense of personal loss. In our striving to become as great as the angels, we experience the loss of our normal humanity. We cannot sustain that experience for any great duration. Nevertheless, that is exactly what the Rabbis wish us to experience for the duration of our lives, through their understanding of the gravity of Tisha B’Av.

The Talmud informs us that when the Second Temple was destroyed, the Rabbis wished to prohibit all manner of food or drink that was connected with the Temple ritual. Thus, meat and grain products should not be eaten because they were offered as sacrifices in the Temple. Wine should not be drunk because it was offered as libations. And even water should not be utilized, because on Sukkot, it was also used for libations.

Rabbi Yehoshua tried to moderate this approach. He stated, “not to mourn at all is impossible, for the decree has already been rendered. To mourn too much is impossible, for we cannot impose upon the community regulations which they cannot sustain.” Bava Batra, 61b.

Homes could not be totally plastered, women and essentially brides, would limit the amount of Jewelry they could wear and bridegrooms would place ashes on their foreheads at the place of laying of the Tefillin.

The compromise he instituted was symbolic in nature. It assured that the Temple and its destruction were not to be forgotten, but it also demonstrated that without the Temple, Jews could not live complete lives. Thus, homes could not be totally plastered, women and essentially brides, would limit the amount of Jewelry they could wear and bridegrooms would place ashes on their foreheads at the place of laying of the Tefillin. See Ibid. In this way, memory of the destruction would always be a significant aspect of our lives, especially during moments which would be especially joyful.

Rabbi Yishmael ben Elisha, carried this sense of loss to its ultimate extreme.

From the time that the evil empire (Rome) spread, who decreed upon us cruel and harsh edicts and nullified the learning of the Torah and fulfilling its commandments and prohibited circumcision, it should be the law that we should not marry and give birth to children and should allow the seed of Abraham to cease of its own accord. However, we should allow Israel to do what it wants (for we know that they will not obey this law). It is better that they sin unintentionally, rather than they sin with premeditation. Ibid.

This is an astounding conclusion, that the concept of maintaining the continued existence of the Jewish people is considered a sin. That it is better for the people of Israel not to exist at all, rather than to exist under conditions without a Temple and under harsh decrees which would threaten their spiritual existence.

The lesson we derive is that without God, life is not worth living. What sustains our lives and enables us to deal with our loss is the unquestioned certainty of God’s redemption. This will be revealed to all with the coming of the messiah quickly in our time.