[FF Editorial: Read this article and connect the dots. What was the freaking corrupt Jho Low doing before the shit hit the ceiling fan? Was he not doing the rounds ravaging women with his ill-gotten gains to satisfy his insatiable lust for his depraved version of sex like Weinstein? He was in all the right places and had all the right publicity. Hollywood was also a channel for money-laundering via film-making as a front just as this evil predatopr of woman, Weinstein was doing and now exposed by Bannon and Trump. Given this background, what and why do you think Jho Low and his side kick, the step-son of the ring leader went to Hollywood?  Connect the dots!] 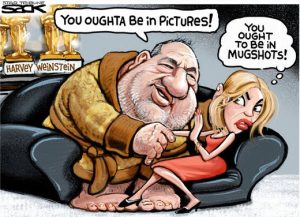 The biggest open-secret in Hollywood was that Harvey Weinstein was a Grade-A pervert.  And his ‘coming out party’ this week is incredibly intriguing.  Hollywood is a dirty place.

And, at this point it’s what we don’t know that is more interesting than what we’ve heard so far.  But, staying focused on Harvey Gropeman, Producer at Large, his position has been to act as one of the main enforcers of the status quo in all of the power centres of the United States.

From the casting couches of Hollywood to the banks on Wall St. to the grubby think tanks in D.C., this story won’t have all the twists and turns of L.A. Confidential, but it will have the same implications.

Weinstein, in effect, was perfectly suited for his role.  He is a man of infinite appetites with poor impulse control.  A pathetic loser with power over hot, young women desperate for fame.

And these women made the trade willingly. “Small price to pay, right?  Wrong”. Weinstein, the evil predator and molester!

Look at the women most opposed to Trump, the Ashley Judds, the Gwynneth Paltrows.  They were all used by Weinstein or someone like him.  More will come out every day.

Ben Affleck is next because he couldn’t handle fame and power any better than the rest of them did. He’s also Batman and Disney will not pass up the opportunity to bloody Warner Bros. nose.

The story is perverted by the desperate need of the powerful to maintain their power at all costs.  Weinstein’s film companies acted like money laundering operations for the DNC.  How many millions did he raise for people like Obama, Hillary, Pelosi, Feinstein?

How many millions were added to the budgets of performer’s salaries to be funneled from Wall St. financiers to those same people?

The whole thing is an internecine nightmare of quid pro quo and the shadiest of finances.

And Steve Bannon just attacked all of it.  In real time.

Yes, you heard me. Steve Bannon is the Dr. Evil in this movie.  He’s the mastermind behind this.  Except that Bannon isn’t the villain (well, to Harvey Weinstein he is) but the protagonist.  Think about it for two seconds.

Who else has motive, means, opportunity and, most importantly, the will to take on the biggest, most powerful (and pathetic) people in the world.

And he doesn’t want money.  Bannon’s already rich.  Remember, as Bannon left the White House he said that there he had influence, but at Breitbart he has power.

We’re seeing the first effects of his deploying that power.

Go through it like Jake Gittes or Sam Spade

Motive?  Bannon, for whatever faults he has, is a patriot.  He’s a disciple of Andrew Breitbart who routinely castigated Hollywood to ‘stop raping the children.’  Bannon joined Trump’s campaign and turned the messaging into a pale reflection of his film, “Generation Zero.”

Bannon understands the cultural and generational imperatives of this moment in time.  If you haven’t watched that film then you don’t know who Steve Bannon is.

Opportunity?  Bannon made millions as a producer on Seinfeld.  He worked in Hollywood for years.  Bannon also saw all sorts of stuff while working for Trump.

Remember, I told you on the outside he would be Trump’s Secret Agent, using his newly-found knowledge (cue the Hero Cycle!) from the Underworld of Washington to deploy sump pumps in the swamp.

Will?  That’s my guess.  Spending time in Washington changes everyone.  It corrupts the venal and galvanizes the principled.  Bannon didn’t want to cut deals to govern.  He wasn’t interested in governing the U.S. with Trump, he was interested in blowing up the vile status quo.  He runs Breitbart.

How do I know Bannon was behind this?  The headlines today are all about how Bannon did some business with Weinstein over a decade ago.  A minor company that Bannon ran into the ground.  It went bankrupt.  Simple guilt by ironic association.

Here’s a better question?  Who hasn’t worked with Weinstein in Hollywood?  This story is simply chum to feed to the loony left’s Facebook feeds.  It will alienate even more people from that pillar of thought control.

In writing, there is something called the “Mid-Point Turn.”  It is the moment when someone does something so singular, usually bad, that it ensures things can never go back to the way they were at the beginning.

The fall of Harvey Weinstein is the ‘Mid-Point Turn’ for this part of the story.  The lid has been blown off the abuse cycle in Hollywood. Someone finally is going down for their crimes.  The guy behind the outing is still in power and the dominoes will continue to fall.

Trump was right to lean on the NFL like he did.  It galvanized his base.  It exposed the hypocrisy of a hyper-violent sport played by criminals and financed by taxpayers.  They think they can just stop taking a knee for a few weeks and all will be forgiven.

No.  It won’t.  The same thing with the image handlers in Hollywood.  They think that isolating Weinstein, putting out rumors of rehab, etc. will make this thing go away.  Harvey Weinstein is going to jail.  He’s a sex offender.

But, the real story is how much this disrupts the money laundering cycle of the entertainment industry to maintain control over the narrative.  Trump’s base already didn’t like Hollywood.  Now they hate it.

“Steve Bannon is a failed f**king screenwriter, and if you’ve ever read [his] screenplay, it’s unbelievable. Now, if he’d somehow managed miraculously to get that thing produced, he’d still be in Hollywood, still making movies and licking my a$$ to get me to do one of his stupid-a$$ screenplays.”

Well, George, Bannon is right now producing one of the best screenplays I’ve read in a long time.  He has power and your boy Harvey has lawyers.  How’s that for an act reversal?