[FF Editorial: Our editor in his recent video addresses has warned repeatedly, that South-East Asia (the ASEAN region), specifically Malaysia would be the next war theatre for geopolitical contention, for which some infantile Indian leaders, associated with the Najib regime lodged police reports against our editor for committing incitement against public order. Our editor posed the critical question to one and all – Would Malaysia end up as the next Libya? And in a recent article by Thierry Meyssan, the issue of the Rohingya Muslims being a tool of British/Saudis’ global agenda was also brought to the notice of Malaysians as a warning not to be sucked into a contrived clash of religions and becoming cannon fodders for the British neo-colonialists. This latest article further corroborates our editor’s views.] 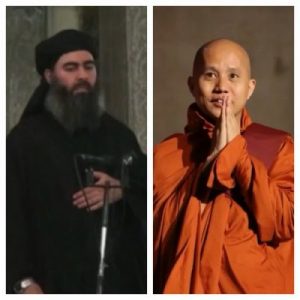 The forces who imagined and planned the annihilation of the “Greater Middle East” considered this region as a laboratory in which they would test their new strategy. While in 2001 they were comprised of the governments of the United States, the United Kingdom and Israël, they have since lost political power in Washington, and pursue their economic-military project by using private multinational companies.

On one hand, they conceived their strategy around the work of Admiral Arthur Cebrowski and his assistant Thomas Barnett at the Pentagon, and on the other, that of Bernard Lewis and his assistant Samuel Huntington at the National Security Council [1].

Their objective is to update their domination with contemporary technical and economic evolutions and extend them to the countries which were once members of the Soviet bloc. In the past, Washington controlled the world economy via the world energy market. To maintain that position, it imposed the dollar as the default currency for any oil contract and threatened any recalcitrants with war. However, this system could not be maintained once gas from Russia, Iran, Qatar – and soon Syria – partially replaced oil.

Reconnecting with the criminal origin of a large percentage of US colonists, these forces imagined they could dominate the rich countries by extortion. In order to gain access to the sources of fossil energy, but also prime materials in general, the stable States (including the ex-Soviet States) would be obliged to solicit the “protection” of the US army and also that of the United Kingdom and Israël.

All that was necessary was to split the world into two parts, to globalise the solvent economies and destroy any capacity for resistance in the rest of the world.

This vision of the world is radically different from the prevalent vision of the British Empire and Zionism. This change of paradigm could only be implemented by a massive mobilisation consecutive to a psychological shock – a “new Pearl Harbour”.  That was 9/11.

Although this project seemed insane and cruel, we can observe today, 16 years later, that it is effectively underway, and also that it has met with some unexpected obstacles.

The economic globalisation of the solvent countries was almost total when one of these countries, namely Russia, offered military opposition to the destruction of the Syrian capacity for resistance, and then the forced integration of Ukraine into the global economy. Washington and London, therefore, ordered their allies to impose economic sanctions against Moscow. By doing so, they interrupted the process of globalisation of the solvent countries.

By launching its “Silk Roads” project, China has invested considerably in the countries which were slated for destruction. The forces which promote the “new map of the world” reacted by creating a terrorist State which cut the ancient Silk Road in Iraq and in Syria, and by transforming the Ukrainian conflict into a war, effectively cutting the original traces of the second Silk Road.

These forces are currently working to spread chaos to a second region, South-East Asia. At least, it is to that area that the jihadists seem to be migrating, according to the United Nations Anti-Terrorist Committee. By doing so, these forces are closing down the 2012-2016 episode in the Middle East – apart from the possibility of a war around the Kurds – and are preparing the devastation of South-East Asia. This would be the second stage of the “clash of civilisations”. After the Muslims against the “Judeo-Christians” (sic) [2], we now have the Muslims against the Buddhists.

[2] Until the 1990’s, the expression ‘Judeo-Christians’ defined exclusively the community of Jews converted to Christianity around St. James – a community which was dissolved after the rape of Jerusalem by the Romans. However, Western Christians continued to allow a large place in their practices to the Old Testament, which they defend, without realising that Jewish points of view often replaced Christian points of view. On the contrary, Eastern Christians, faithful to the tradition of their predecessors, only rarely make reference to the Jewish writings and refuse to read them during the Eucharist.