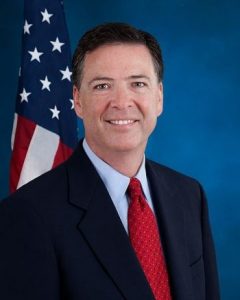 Just when you think Washington cannot be more corrupt, our elected officials prove otherwise. It has come to light that former director of the FBI, James Comey, started drafting a letter of exoneration for Hillary Clinton before interviewing key witnesses in the case.

This was concerning the 2016 case of Clinton’s secret computer server, kept in her private bathroom which was used to communicate via email with the Saudis and other foreign powers whom we know made major monetary contributions to the Clinton Foundation while Hillary was Secretary of State. Using this server, Clinton leaked unprecedented amounts of classified information which she later claimed she didn’t know was classified. At the same time, numerous low-level members of the military were being given harsh prison sentences for committing crimes that were similar.

Committee Chairman Chuck Grassley and Subcommittee Chairman Lindsey Graham penned a letter to the FBI regarding the discovery saying, “Conclusion first, fact-gathering second — that’s no way to run an investigation. The FBI should be held to a higher standard than that, especially in a matter of such great public interest and controversy.”

The committee was in the process of reviewing a vast pile of transcripts when they discovered Comey’s unfinished letter of exoneration. They found a heavily redacted letter penned by the former FBI director dated before key investigative processes which came to the premature conclusion that Hillary Clinton was not to be charged.

In other words, Comey decided Clinton would face no charges long before the investigation into her crimes was complete. Nevertheless, the investigation was allowed to continue. Witnesses were interviewed, hearings were held, agents were activated, and the news cycle was fully fired up even as the presidential election was going on.

Was all of this just a farce, as far as James Comey was concerned, to fool Washington officials, law enforcement people, voters and tax payers into thinking that there was a chance that Clinton might face justice if she was found guilty?

Was all of this allowed to go on only to cover up the fact that we live under a two-tiered justice system where people like Hillary Clinton needn’t fear punishment for her crimes while mere citizens have their lives flushed down the toilet for far lesser misdeeds?

In the Fall of 2016, congressional Democrats claimed that Comey’s conduct, in this case, constituted a violation of the Hatch Act. This led to an official investigation into Comey’s conduct, which we know did not result in any legal consequences for the now fired FBI director.

The Special Counsel Office shared interview transcripts after Comey’s firing by President Trump. The Special Counsel asked principal deputy, Trisha Anderson, when it was that she had first learned about Comey’s plans to make a public statement that Clinton would not be charged. Anderson’s response- retrieved from the midst of heavily redacted text- read, “I’m not entirely sure exactly when the idea of the public statement first emerged,” Anderson said. “It was, I can’t, I can’t put a precise time frame on it, but [redacted] … And then I believe it was in early May of 2016 that the director himself wrote a draft of that statement.”

In this interview, James Rybicki, Comey’s Chief of Staff, told the Office of Special Counsel that James Comey sent emails to several people in the Spring of 2016, to say, in Rybicki’s words; “you know, again knowing sort of where—knowing the direction the investigation is headed, right, what would be the most forward-leaning thing we could do.”

Apparently, the most ‘forward leaning thing’ they could do is to spare Hillary Clinton from any possible legal jeopardy over crimes for which the evidence is manifold.

When Rybicki was approached later concerning his statements found in the documents, specifically as to whether he believed that Comey had made his decision to exonerate Clinton before any key interviews had been conducted, he indicated that he believed Comey did prematurely exculpate Clinton for her crimes.

Grassley and Graham’s letter to the FBI contained requests for copies of Comey’s closing statement on the Clinton investigation, to include the initial draft of the final statement. The letter also asked for any related documents. Grassley and Graham have yet to receive a reply.

But at this point, it’s clear that Comey has committed a crime. What is not clear is whether or not conclusive evidence of having committed a crime means anything when that person has friendly connections to the Clinton crime family.