How The Government Conditions Citizens To Obey

How The Government Conditions Citizens To Obey

By Anthony Wile – The Daily Bell

Can you count how many ways the government manipulates people to be the type of citizen they can easily control?

I think that would be impossible to come up with an actual number when every facet of government is dedicated to shaping the citizen in ways contrary to his or her nature.

It ranges from tax credits for having kids to increased welfare for being a single mom; from subsidies for growing corn to mandates to eradicate invasive species. The government is changing citizens’ behavior with incentives and disincentives, which destroys the natural spontaneous order society would otherwise fall into.

The government has basically turned society into a pinball machine which bounces citizens from here to there, taking away control of their destiny. And then, they use their own coercion as an example of why we need more coercion: because people cannot control their own outcomes in life!

Governments and corporations alike know that the best way to mold a person is to start in childhood.

Yet as disconcerting as these figures are, the UK isn’t the first country to have them. In 2009, five deaths have already been linked to antidepressants in Australian children aged 10 to 19; moreover, 89 recorded adverse reactions in children under nine were associated with antidepressants. Dr. Joe Tucci, Chief Executive of the Australian Childhood Foundation, said: “I cannot think of a good reason why any six-year-old, or younger, should be treated with antidepressants. I think it’s gone up because medication is being used to treat the symptoms and not the cause.”

The actual cause is where the story starts. Why are children so young depressed?

Coercion is arguably the leading cause of all mental health issues. In modern society, children start to feel this coercion as soon as they are born into a society shaped like a cattle pen.

Increasing suicide attempts by children are concentrated around the times when school is in session. The unnatural environment in which they are placed causes extreme stress for many children. The “well-adjusted” ones take to the authority like good sheep, and everyone else gets loaded up with drugs to make them a better citizen.

Later in life, a good citizen will take this lesson to heart. Don’t feel like you fit in? Not happy with your job, spouse, environment? Anxiety, depression, helplessness, anger over things that you cannot control because you feel forced into a life you don’t want?

Parents who raise their kids to not blindly follow authority are doing a great service. It is tempting for parents to snap, “Because I said so!” to children, but it is better to explain why the rules are what they are whenever possible.

The kids rewarded in school are the ones best at following directions, and the teacher always hates the kid that asks why they have to do what they are told when it doesn’t make any sense. I once had to write a letter home because I didn’t wear my coat at recess. My parents responded by letting the teacher know that at the age of 12, my nerve endings had developed enough so that I could choose if a coat was necessary while running around in 50-degree temperatures for 15 minutes.

But police do the same thing to adults conditioned by the public school system.

If you get pulled over or are otherwise unfortunate enough to come into contact with the police, your life is literally in serious danger if you do not immediately and obediently follow all their orders, even when they have no legal standing to make those demands. Moving your hands out of site, asking why you are being arrested, or simply not hearing or understanding an officer are all offenses worthy of execution in the United States.

The teachers and police who expect blind obedience simply because they are an authority figure are programming the same thing into citizens: that the state must be obeyed, or there will be consequences.

And this same philosophy of shaping the citizen is seen everywhere to varying degrees and molded for different types of people. The newest trend is to police thought crimes by claiming that hate speech is not protected free speech. If you offend anyone, you have committed a crime, if you have a contrary opinion, it is fake news, if you desire any internet privacy, you are probably a terrorist.

Great Britain is especially intense on their push to socialize the citizens to behave exactly as the government wishes. The National Health Institute has been key to drugging up kids and programming the citizens to let the government choose when citizens live or die.Individuals must purchase licenses to watch television, and the government is super serious about ferreting out anyone without a license.

But without the little things, people would never have slipped to the point of letting the government decide who will get lifesaving medical procedures and who will be waitlisted to death.

One of these little things is that individuals must purchase licenses to watch television, and the British government is super serious about ferreting out anyone without a license. 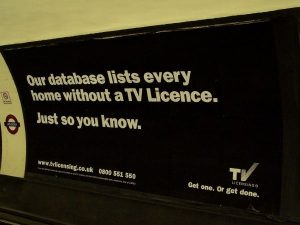 Why do they make such a big deal about something so small? Because it trains the citizens to do exactly as they are told, and not bother with any pushback. It ingrains the idea that the state can and should regulate every facet of human behavior.

It is like the old marketing trick, where if you get someone used to saying yes, they will keep saying yes when you ask if they want to buy.

And of course, China has already gone full blown 1984 with their social credit system to regulate the behavior of citizens by taking away rights and extending privileges based on a citizenship score which takes into account what your neighbors think of you, what you say about the government online, and how involved in social life you are.

But the most extreme examples are only possible because for so long people have accepted the government’s authority to regulate the little things. Seatbelt laws, required permits, and even complying with the TSA for illegal searches are all ways that are more about control than keeping you safe.

That is why it is important to push back at every little rule and regulation, and question every authority. People may think you are making a big deal about nothing, but unless you push back on the little things, you will be unable to resist when it comes to the important issues.