[FF Editorial: There are no free lunches whenever the Deep State gets into doing their thing – starting wars. South Korea, the ever faithful lap dog of the US Military-Industrial Complex, in its haste to pander to the war party, has now exposed the entire country to an irreversible environmental nightmare. Instead of being protected by the THAAD missile defence system against a non-existential threat from North Korea, South Koreans are now the victims of the deadly chemical called perchlorate which has already devastated Maryland, Texas, California and Florida. More importantly, the livelihood of the farmers in Seongju would be destroyed once perchlorate contaminates the ground water. Who will buy the famous melons from Seongju?] 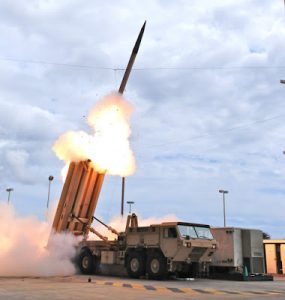 The unwelcome US deployment of the THAAD (Terminal High Altitude Area Defense) missile defense (MD) system in Seongju, South Korea is not only a significant threat to regional peace but is also a major environmental catastrophe waiting to happen.

The reason is that rocket fuel contains a deadly chemical component called perchlorate.  And since the Seongju area is a melon farming community the risk of ground water contamination by perchlorate should be alarming to all concerned.

Perchlorate, the explosive ingredient in solid rocket fuel, has leaked from military bases and weapons and aerospace contractors’ plants in at least 22 states, contaminating drinking water for millions of Americans.

Reports indicate that 20 million to 40 million Americans may be exposed to the chemical. “We know that the Center for Disease Control has found perchlorate in 100 percent of the people they’ve tested, so there’s widespread exposure, through contaminated drinking water and also through contaminated food,” one expert reported.

The government has found traces of a rocket fuel chemical in organic milk in Maryland, green leaf lettuce grown in Arizona and bottled spring water from Texas and California.

Next week South Koreans go to the polls to elected a new president after the previous right-wing President Park was impeached.

The Pentagon rushed the THAAD deployment ahead of schedule wanting to lock-in the controversial MD system before a new government took office.  The US fears that the likely new President Moon (a progressive) would ultimately delay or possibly even prevent the US from deploying the interceptor system due to the outrage coming from China and Russia who view THAAD as really being aimed at them rather than North Korea.

As the people of Seongju continue their fight against THAAD they’d be wise to begin to talk about the likely groundwater contamination from the rocket fuel that will be transported and stored on site at the new base presently being constructed at a former golf course.  It’s only a matter of time that perchlorate will be seeping into the water and ultimately impacting their health and their melon crops.