By Bethan Mckernan – The Independent 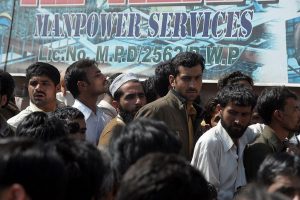 The Kingdom of Saudi Arabia has expelled almost 40,000 Pakistani migrant workers in the last four months, local media has reported.

Over 39,000 people have been deported since October 2016 over visa violations and security concerns, the Saudi Gazette reported, citing unnamed interior ministry officials. As well as crimes including drug trafficking, forgery and theft, an unknown number of those removed from the country were suspected to have links to Isis and other extremist groups, the paper said.

The alleged mass deportations come after a year of strikes and other unrest in the kingdom due to unpaid wages following the oil market’s decline and subsequent blow to the Saudi economy.

2010 census figures show that 8.5 million of Saudi Arabia’s 27 million strong population, or around 30 per cent, are foreign nationals.

According to a 2014 European University Institute report, there are approximately 900,000 people of Pakistani nationality currently employed in Saudi Arabia’s vast construction industry and other low-paid service jobs.

In Mecca in January, dozens of expatriate workers, mostly from poor Asian and Middle Eastern countries, were beaten and jailed over public protests against unpaid salaries that turned violent.

While the Philippines and India have also seen hundreds of thousands of citizens returned home after lay-offs in Saudi Arabia, the deportation of Pakistani workers has been mainly driven by security concerns, the New Arab reported.

Several prominent Saudi politicians, including Abdullah Al-Sadoun, chair of the security committee of the country’s Shura Council, have called for tougher screening processes for Pakistani nationals before they are allowed entry into the country.

“Pakistan itself is plagued with terrorism due to its close proximity with Afghanistan. The Taliban extremist movement was itself born in Pakistan,” he said.

In 2016, 35-year-old Abdullah Gulzar Khan, a Pakistani citizen who had lived and worked in Saudi Arabia legally for the previous 12 years, blew himself up in a suicide attack near the US consulate in Jeddah. No other injuries were reported in the incident.

Two Pakistani nationals as well as one Sudanese and one Syrian were also arrested for allegedly planning a terror attack on a football match between the kingdom and the United Arab Emirates in Jeddah’s Al-Jawhara Stadium last year.

This is the first time that Riyadh has taken such a step in dealing with a section of Pakistani nationals it claims could be involved in acts of terror.

A leading Saudi paper, Saudi Gazette, reported last week that over 39,000 Pakistanis have been deported from Saudi Arabia during the period.

This is the first time that Riyadh has taken such a step in dealing with a section of Pakistani nationals it claims could be involved in acts of terror.

The Gulf nation’s strong action comes in the backdrop of its improving strategic tie with India and the onset of Donald Trump’s presidency in the US. Earlier this month, Kuwait banned would-be immigrants from five Muslim majority nations including Pakistan from applying for visa.

Saudi Arabia, after the UAE, is emerging a key counter-terror partner for India in the Gulf, with the richest state in that region feeling heat of radical and terror groups. The Saudi King is also expected to visit Delhi this year as the oil-rich kingdom also eyes major economic opportunities in both hydrocarbon and non-hydrocarbon sectors.

The deportations of Pakistani nationals were attributed to visa violations, crime and security concerns linking the deportees to terror organisations.

The Saudi Gazette, citing “informed security sources”, reported that a number of the Pakistanis deported were linked to the Daesh group or other terrorist activities. The Gazette, quoting sources, claimed that the involvement of a number of Pakistani nationals in some terrorist actions orchestrated by Daesh or the Islamic State is a cause of ‘public and societal worry’.

Other Pakistanis were deported over crimes including drug trafficking, theft, forgery and physical assault. In comparison, Indians are the preferred workforce across the six Gulf states, persons familiar with the expatriate issue told ET.

News of the deportations follows intermittent reports of migrant worker protests over unpaid salaries, after the increasing strain on Saudi public finances due to the downturn in oil prices in recent years.

But the deportation of Pakistani workers has been driven primarily by security concerns, according to the Saudi Gazette report. Saudi officials have called for a rigorous vetting process before allowing foreign workers into the kingdom.

Abdullah Al-Sadoun, chairman of the security committee in the Saudi Arabian Shura Council, urged for tougher screening process of Pakistani nationals before they are allowed entry into the country.

“Pakistan itself is plagued with terrorism due to its close proximity with Afghanistan. The Taliban extremist movement was itself born in Pakistan,” he said. This is probably the first time that Riyadh has recognised that Taliban receives active support from Islamabad. Ironically, Saudi Arabia was among the three countries that recognised the Taliban government in Kabul between 1996 and 2001.

Al-Sadoun stressed that the religious and political beliefs of Pakistani nationals must be known to Saudi authorities before they are granted work or given entry into the kingdom.

Quoting the Saudi interior ministry, the Gazette said 82 Pakistanis are currently in intelligence prisons for suspected terror and security-related issues. As many as 15 Pakistanis, including a woman, were nabbed following the recent terrorist operations in Al-Harazat and Al-Naseem districts in Jeddah.

“Last year, the Saudi security forces had foiled a terror plot in which two Pakistanis were held for plotting to explode Al-Jawhara Stadium in Jeddah where more than 60,000 spectators had gathered to watch a soccer match between the national teams of the Kingdom and the United Arab Emirates,” the Gazette reported.