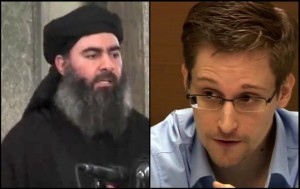 By Anas Chihab – The Moroccan Times

The former NSA and CIA agent Edward Snowden revealed that the leader of the Islamic State of Iraq and Syria Abu Bakr Al Baghdadi was trained in Israel, various Iranian sources reported.

Snowden added that the American CIA and the British Intelligence collaborated with the Israeli Mossad to create a terrorist organization that is able to attract all extremists of the world to one place, using a strategy called “the hornet’s nest”.

The “Hornet’s nest’’ strategy aims to bring all the major threats to one place in order to track them, and mostly to shake the stability of the Arab countries. The NSA agent revealed that the ISIS “Calif”, Abu Bakr Al Baghdadi went through intense military training in the Israeli intelligence “Mossad”.

Besides military training, Al Baghdadi studied communication and public speaking skills in order to attract “terrorists” from all the corners of the world.