[FF Editorial: It is ironic that Muslims hate the guts of Donald Trump on account of his alleged “closeness” to Jews because he spoke in support of Israel at an AIPAC conference during his campaign for president (just as Killary Clinton, Obama, Bush and Bill Clinton did, but conveniently forgotten by the haters) and has a Jew as a son-in-law, married to his daughter Ivanka!

It is to be noted that Kushner is an Orthodox Jew. But, in the mind-set of the Zionist Jews, such “closeness” does not qualify Trump to be trusted as a devoted ally of Israel and the Jews. If an Orthodox Jew is suspect and a danger, do not be surprised therefore, that Haaretz would labelled anyone associated with that particular Jew as a “threat”, “white supremacist” etc. such as Steve Bannon (who used to work in Goldman Sachs). Something more is required! We hope that this article from a leading mouthpiece of Zionist Israel will open the eyes of many “haters” and finally arrive at an understanding of the Zionists’ world view – the Oded Yinon’s world view!]

Read the article below to find out more.]

“If Jared Kushner were interested in upholding the values that the vast majority of American Jews share he would have distanced himself from the Trump campaign many months ago”.

Jews around the country are scared. There have been threats of violence against Jewish organizations across the country, unprecedented waves of online harassment against individual Jews, targetings of Jewish journalists and a president whose behavior and rhetoric echoes those of authoritarian dictators throughout history.

In times like this, it’s natural to look for signs of hope, and many in the American Jewish community may point to Jared Kushner’s appointment as senior advisor to President Trump as a sign that America will remain safe for us. But that’s a false hope. Make no mistake: The status of the United States as a haven for Jews is more endangered now than it has been for generations.

Trump has flanked himself with an Orthodox Jew (Kushner) on one side and a purveyor of white supremacist rhetoric (chief strategist and senior counselor Steve Bannon), on the other. In this arrangement, Kushner plays the classic historical role of the figurehead Jewish adviser. As author Jonathan Levi wrote for the Forward last July, Kushner’s relationship to Trump eerily parallels the story of Charlemagne, the 8th century King of the Franks. According to Levi, “Charlemagne was keen to marry his daughter to a Jew who would…cement the support of the Jewish people.”

There are other examples of such Jewish advisers throughout world history, and many of these individuals share common characteristics: their power is precarious, and their interests are frequently aligned with their patrons rather than with their community. Most ominously, the failures of the rulers they serve are often laid at the feet of the Jewish scapegoat and his brethren by the rulers’ anti-Semitic followers. All of these traits perfectly describe the role Kushner has played in an attempt to soften, rationalize, and put a friendly Jewish face on the vile hatred of his father-in-law. These characteristics foreshadow the cyclical choreography of anti-Semitism.

Donald Trump and his incoming administration represent the antithesis of the core Jewish values of recognizing the inherent human dignity of all people and protecting the most vulnerable in society. He ran a campaign that scapegoated racial and religious minorities, and will undoubtedly run the country the same way. Jews must remember the hard lessons we’ve learned before: White supremacy and white nationalism – philosophies that frequently guide the politics of Steve Bannon and even Trump himself – are inextricably linked with anti-Semitism. When Trump advocates for policies that threaten Muslims or immigrants, it is entirely possible that Jews are not far behind.

The reality is simple: Jared Kushner is not interested in upholding the values that the vast majority of American Jews share. If he were, he would have distanced himself from the Trump campaign many months ago, just as most American Jews opposed Trump when he threatened American ideals with a Muslim registry, called Mexicans rapists and murderers and began to intimidate the press. Kushner didn’t act as a representative of the majority of our community then, and he cannot be counted on to protect or represent Jews now.

While being fearful is justified, ingratiating ourselves to an incoming president who has shown nothing but disdain, intolerance and bullying behaviour to other minority communities will make us complicit in his bigotry.

Rather, the way to create safety for the Jewish community is to join in solidarity with the other likely targets of a Trump Administration: Muslims, immigrants, women, people of colour, and those living in poverty. In forming bonds of mutual support and protection, an alliance of American Jews and historically oppressed people is our strongest line of collective defense against the threats to come. 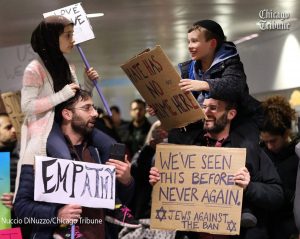 [FF Editorial: Now do you see why Zionist Jews allied with the Muslims etc.? Such alliance is not genuine but a mere tactic as a protection for the Jews – i.e. other races and communities are co-opted as a shield / cannon fodders for the Jews. We have pointed out and quoted the Oded Yinon plan to show and explain that Muslims can never trust the Zionist Jews when they are responsible for every mass slaughter of the Muslims in the Middle East. Hopefully Muslims will wake up from the slumber induced by Zionists propaganda.]