Global hedge fund tycoon George Soros, recognizing that growing numbers of European voters are turning away from the corporate-controlled “social democratic” parties, is reining in so-called “left” parties in order to cement his control over parties, including SYRIZA in Greece and Five Star in Italy, that threaten the cohesiveness of the European Union.

When SYRIZA in Greece was able to form a government after the repeated electoral failures of the establishment corporate conservative and social democratic, Soros and his American National Endowment for Democracy (NED) moved in to exercise control over SYRIZA leaders. The first thing the previously Euro-skeptical SYRIZA leader Alexis Tsipras did when he became prime minister in 2015 was to embrace the EU-directed draconian austerity measures that swept him into office in the first place. The first clue that Tsipras and SYRIZA would sell out to the EU bankers and the Soros-funded globalist interests in Europe was his choice of former Brookings Institution fellow, the Greco-Australian Yanis Varoufakis, as finance minister. Varoufakis, a Soros plant, immediately set out to work out agreements with his fellow EU finance minister, as well as with the Euro-bankers. To ensure that SYRIZA’s leftists could be held in check, Tsipras was forced to conclude a coalition agreement with the Independent Greeks, a breakaway party from the conservative and pro-EU/pro-NATO New Democracy party.

With SYRIZA’s bona fide leftists outraged by Tsipras’s selling out to the EU and bankers, his coalition partners, the Left Platform and the Internationalist Workers Left faction, bolted from SYRIZA to form Popular Unity. The Greek Communist Party and Popular Unity serve as the only true leftist bulwark against the Soros schemers in the rest of Greek leftist politics.

After Italian prime minister Matteo Renzi lost his December 4, 2016, referendum to limit the power of Italy’s regional governments and curb the power of the Italian Senate, the Sorosites in Italy became alarmed that Italy was becoming another loose cog in the EU machinery. Renzi’s government resigned as a result of the “No” vote, which was likened to the BREXIT vote in the United Kingdom to leave the EU. The leading Italian Euro-skeptic party is the Five Star Movement (M5S) of Italian comedian Beppe Grillo. Five Star formed a Euro-skeptic bloc in the European Parliament with Britain’s UK Independence Party (UKIP), for which Nigel Farage is the leading spokesman. Moreover, Five Star politicians campaigned against Renzi’s referendum.

Soros, working from behind the scenes in New York and London, engineered a coup over this past weekend. Grillo was convinced to abandon his alliance with UKIP and offer to join the European Parliament’s extremely pro-EU bloc — the Alliance of Liberals and Democrats for Europe (ALDE). The leader of ALDE is one of Farage’s oratory sparring partners in the parliament, the boyish-looking former Belgian prime minister Guy Verhofstadt. After the BREXIT vote, Verhofstadt, an uncompromising European federalist, was named the EU’s chief BREXIT negotiator, a move intended to make the UK’s withdrawal from the EU as financially and politically painful as possible for the country.

Grillo showed the world his puppet strings to Soros when he announced that the Five Star Movement and ALDE shared a “common vision” for European unity. The shift in Five Star’s political leanings from anti-EU to pro-EU was a political bombshell that will weaken the opposition to the EU within Italy. And that has been Soros’s plan all along. There was one major glitch for Five Star and Grillo. ALDE refused to permit Five Star to join its parliamentary bloc. However, the damage was done. The anti-EU Five Star, which has wrested control of the mayors’ offices of Rome and Turin, had been exposed as a Soros front.

It can be expected that Five Star’s embrace of the EU will result in a split in the party. Two leading members of Five Star, Giovanni Favia and Federica Salsi, were expelled by Grillo after they questioned his fascist tendencies to make all the decisions without input from other party disciples. Many former Five Star officials concluded that the party was nothing more than a cult following for Grillo. But for Soros, such cultist movements are fodder for his operations, as previously seen with the loyal cult followers of Tsipras and Varoufakis in Greece. 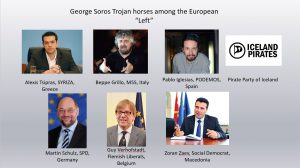 Soros’s puppet strings also extend to other “alternative” left-wing organizations in Europe, including PODEMOS in Spain, the second largest party in Spain and whose leader,
Pablo Iglesias, is a Soros acolyte. To cover all sides, Soros also controls the alternative pro-business “liberal” party, Ciudadanos (Citizens). Another Soros Open Society Institute (OSI) project is the Pirate Party, which is an emergent political force to be reckoned with in Iceland and Germany. The “anti-establishment” Iceland Pirate Party, now the third largest party in the country, favors EU membership for Iceland pursuant to a popular referendum.

One European politician who has no illusions about Soros’s operations in former Macedonian Prime Minister Nikola Gruevski, who saw his government undermined by a Soros-NED-EU “color revolution” led by Macedonia’s Social Democratic Party leader Zoran Zaev. With his VMRO-DPMNE government trying to form a government with an Albanian political coalition increasingly coming under the influence of Soros, Gruevski is finding the goal difficult.

In a recent interview with the Macedonian newspaper “Republika,” Gruevski was extremely candid about his view of Soros’s activities in his country. Gruevski pinned the political turmoil experienced in his country squarely on Soros: “Besides the continued activities organized by his institute, through the media and the NGO organizations he funds in Macedonia, through the so-called colorful revolution, our understanding is that Soros was deeply and personally involved in the crisis in Macedonia and in the wiretapped materials that caused it . . . We are not the first country in which such an operation was initiated.”

Gruevski’s comments are in sync with those of Russian President Vladimir Putin and Foreign Minister Sergei Lavrov, as well as by Hungarian Prime Minister Viktor Orban and former Ukrainian President Viktor Yanukovych, about the Soros operations that have targeted their countries. Last year, the mayor of the Latvian city of Ventspils, Aivars Lembergs, a member of the Union of Greens and Peasants Party, urged that Soros be banned from entering Latvia and that all “Soros-related organizations” in the country be shuttered. Lembergs added that Soros propaganda outlets in Latvia urged the acceptance of refugees. Lembergs declared, “I call on the government of Latvia—and first of all on the Minister for Foreign Affairs—to declare George Soros persona non grata in the interests of the national security in Latvia.”

Soros has his Trojan horses in place in other countries that may elect governments opposed to the EU. One is Germany, where the Alternative for Germany (AfD) is becoming stronger as a result of the Soros-encouraged mass migration of Muslims into the country from the Middle East, Asia, and Africa. Most of Soros’s “leftist” acolytes in Germany are found in the Left (Die Linke) and the Green Party. Another Soros plant is German Social Democrat Martin Schulz, since 2012 the president of the European Parliament and a regular sparring partner of Farage. Schulz is planning to run for the German Bundestag in a move seen as an attempt by Soros to maintain Germany’s pro-EU stance in the event the current pro-EU Christian Democratic chancellor Angela Merkel falls from power.

To counter criticism of Soros’s involvement in the political affairs of other countries, particularly in Europe, Soros backers have accused Soros’s opponents of being “George Soros conspiracy theorists” and have posted a page with that title on Wikipedia.

Following Donald Trump’s unexpected presidential victory in November, Soros huddled with leaders of groups he finances to plot opposition to the Trump administration.