On November 7, the day before the presidential election, Barack Obama told a crowd of Hillary Clinton supporters in Ann Arbor, Michigan, “Donald Trump  is temperamentally unfit to be commander in chief.” One week before, on October 31, Obama used the White House’s “Red Phone” — which is actually a Washington to Moscow “hot line” communications system that provides a direct link to the Russian President in the Kremlin — and informed the Russian president that if alleged Russian hacking of computers tied to the U.S. election did not stop, the United States would respond with “armed conflict” against Russia. The Red Phone system has been transformed from a teletype system installed in 1963 to a fax link in 1986 and, finally, an e-mail connection in 2008.

When Obama called Trump “temperamentally unfit” to be commander-in-chief, he could have easily been referring to himself. Not since another fateful October, the Cuban Missile Crisis of 1962, had the United States come so close to an all-out war with Russia. However, in the case of President John F. Kennedy, the presence of Soviet offensive nuclear-tipped missiles in Cuba were proven by U-2 photographic intelligence presented publicly by U.S. ambassador Adlai Stevenson before the United Nations Security Council. In the case of Obama, the only intelligence he possessed that alleged Russia was behind hacking Democratic National Committee (DNC) computers was a Secret report, not released to the public, ginned up by Obama’s Muslim-convert Central Intelligence Agency director John Brennan, who had been serving as a Saudi Arabian intelligence mole within the CIA for almost four decades.

Obama, according to NBC News, warned Putin personally against hacking Democratic Party computers during the G-20 meeting in China in September. When Obama, obviously urged on by Brennan, felt the Russian hacking was continuing, he sent a stark message over the Red Phone to the Kremlin, in part stating, “International law, including the law for armed conflict, applies to actions in cyberspace.” While Obama and Brennan continue to refuse to present to the public the contents of the CIA’s Secret report alleging Russian hacking of the DNC, they had no problem revealing that Obama almost pushed the nuclear trigger on Russia. Only a madman would resort to such action based on the flimsiest of intelligence from an Irish Catholic director of the CIA who felt it necessary to convert in the mid-1990s to the most radical sect of Islam, Wahhabism.

Obama sent his war message to Russia over a special email channel to reduce the risk of nuclear war resulting from cyber-security threats. The cyber-security email link was installed in 2013 as part of the hot line network linking by satellite the Nuclear Risk Reduction Centers in Washington, DC and Moscow.

The White House insists that Obama’s message to Putin sunk in, since the hacking is claimed to have ceased on November 8, Election Day. However, DNC acting chair Donna Brazile claims the hacking continued on Election Day and thereafter. If Brennan and his fellow war-mongers had actual evidence that Russia had been behind the hacks, then why do they continue to insist that the hacking stopped on November 8, when Brazile clearly claims they had not? The easiest explanation is that the Russian government was not the source of the computer hacking events and they were being carried out by some other party. Perhaps that other party wanted an Election Day war to begin with Russia, which would mean a declaration by Obama of a national state of emergency and a postponement of the election, as had occurred in New York City on September 11, 2001, the previous time the Red Phone was used by the White House. 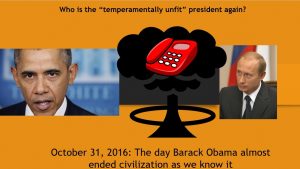 Had Obama authorized a military strike on Russia on Election Day, the civilian U.S. government would have morphed into the secret government where the Federal Emergency Management Agency and the Department of Defense’s Northern Command would have replaced the U.S. Congress and the courts as the government of the United States. It is likely that there would have never been an election, let alone a President-elect Trump.

Upon first notification of a pending U.S. military strike on Russian targets in Europe, Asia, and the Middle East — known in Pentagon language as DEFCON One — Russia would have placed its RS-24 Yars Intercontinental ballistic missiles, each with ten independently- targetable nuclear warheads on final launch-on-command alert.

Also placed on final launch alert would have been the Sarmat-28 ICBM, which has a range of 6,835 miles and a warhead capable of wiping out the entire state of Texas. Launch authorization from the Kemlin would also have been sent to Russia’s fleet of nuclear submarines, the Borei and Typhoon class, and their Bulava-class submarine launched ballistic missiles, and the Akula II, with its nuclear warhead Granat cruise missiles. The latter would target U.S. aircraft carriers on deployment in the Atlantic, Arabian and Mediterranean Seas, and Pacific.

Russian tactical nuclear missiles would be trained on NATO airfields and command centers in the Baltic states, Poland, Germany, the United Kingdom, Norway, Italy, Turkey, the Netherlands, Belgium, Romania, Hungary, Greece, and Bulgaria. Also targeted would be Swedish and Finnish airfields previously made available for NATO use, as well as U.S. air and naval bases in Japan, Okinawa, Guam, and South Korea. The moment U.S. and NATO weapons struck Russian targets at sea or on land in such locations as Kaliningrad, Crimea, the Russian Far East, and Murmansk, the Russian nuclear codes would authorize a massive nuclear strike on NATO and the major U.S. military and political centers of Washington, DC; Colorado Springs; San Diego; Norfolk; Jacksonville, Florida; King’s Bay, Georgia; Bangor, Washington; Omaha; Houston; Pearl Harbor; and ICBM bases in North Dakota, Missouri, Wyoming, Montana, and other states.

Had Obama committed the unthinkable act, he would have gone down in history — at least the history a few desperate survivors of nuclear war could have contemplated — as not only the first African-American president of the United States but the final president of the United States. As for the Wahhabist Brennan, the Koran predicts a final showdown between Islam and Rum. Although Rum was considered by Mohammed and his followers to be the then-Byzantium, the Wahhabis and their extremist co-fundamentalists believe Russia is the present-day “Rum,” owing to it being the seat of the Russian Orthodox Church.