If you want to understand today’s populism, don’t look to the mainstream media’s comically buffoonish propaganda blaming the Russians: look at the four issues listed below.

One of the most disturbing failures of the mainstream media in this election cycle was its complete lack of historical context for Trump’s brand of populism. If you consumed the mainstream media’s coverage of the campaign and election, you noted their obsession with speech acts (as opposed to concrete actions), personalities and conspiracy theories pinning American populism on Russian propaganda.

This is convenient for the apologists of the embattled status quo, but it’s utterly false: America’s enormous populist movements have never led to fascism.

Notice the classic propaganda ploy being deployed here: since dissent is impossible in a regime as well-managed and prosperous as America’s status quo, populism must be driven and controlled by evil foreign agents.

This is laughably absurd: America’s populist movements, including the present one, have been revolts against the concentrated wealth and power of self-serving status quo elites.

If the mainstream media actually employed well-informed analysts rather than empty-headed politically correct parrots, you might have learned that America has a long and rich history of populism that did not lead to authoritarianism or fascism.

Mike Swanson of WallStreetWindow.com and I recently discussed Populism and political realignments in a 34-minute podcast: Charles Hugh Smith on The Mainstream Media and the Populist Global Revolt.

There have been several major populist movements against the ruling elites:Andrew Jackson’s election in 1828 stemmed from such a revolt, and the Populist Party (a.k.a. People’s Party) and Socialist Party movements of the late 1800s and early 1900s were progressive/left-wing reactions to the enormous concentrations of wealth and power in the elites of the day.

Both movements attacked the money and credit mechanisms of the elites: in Jackson’s case, the target was the Second Bank of the United States; in the Populist Party era, the issue was free silver, i.e. the expansion of the money supply via issuing silver coinage.

In the 19th century, agrarian interests that were losing power to industry and banking/ finance typically found expression in populist movements.

Such movements included an elite faction that saw its power and wealth being threatened by new elites. For example, England’s landed gentry resisted the political and economic power of industrialists, who sought an expansion of the engines of their wealth: global trade and a poorly paid, mobile urban workforce.

Mike mentioned a seminal book, Golden Rule: The Investment Theory of Party Competition and the Logic of Money-Driven Political Systems, which proposes there is actually only one party in America: the property party, i.e. those who own the productive assets of the nation.

The winds of change can be understood by tracking which wealthy factions are funding the two political parties. Author Thomas Ferguson makes the case that Franklin Roosevelt won the presidency partly as a result of the financial support of large multinational corporations with global interests.

Roosevelt’s opponents were typically domestic companies that depended on cheap labor and stiff tariffs to keep out competition.

The current era of populism is perhaps best typified by Bernie Sanders, who raised a phenomenal $234 million from individuals, with Political Action Committees (PACS) contributing a thin sliver of $6.3 million to his campaign.

There is no better proof that today’s populism is deep-rooted and broad-based than Sanders’ astounding $234 million contributions from individuals, not elites.Please name me another presidential candidate who raised 97% of their funding from small donors.

Hillary Clinton raised a gargantuan $1.3 billion,of which $188 million came from Super-PACs. A tiny percentage of her total funds came from small donors; her campaign raised $556 million and the Democratic Party’s (elitist) fund-raising committees ponied up another $544 million. (source)

Trump’s campaign raised about 27% of its funds from small donors, compared to the Romney campaign’s 6%.

Today’s populism has drawn funding from individuals and enterprises who have been left out of globalism’s massive increase in elitist wealth. If we look for issues that crossed party lines, i.e. that drew support from both Sanders and Trump supporters, we find four core issues:

Issues 1, 3 and 4 were encapsulated in Democrat George McGovern’s 1972 campaign slogan come home, America, a message disdained by today’s Democratic Party elites, who have skimmed hundreds of millions in campaign contributions from global finance and corporate interests.

Take a look at these charts of U.S. corporate profits and the decline of labor’s share of GDP, and ask: isn’t the source of today’s populist disgust and anger at America’s ruling elites rather obvious? 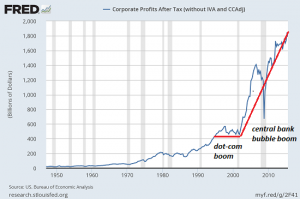 Is it coincidence that corporate profits skyrocketed from about 2001, right when labor’s share of GDP fell off a cliff? If you want to understand today’s populism, don’t look to the mainstream media’s comically buffoonish propaganda blaming the Russians: look at the four issues listed above and these two charts.