On October 28, ‘moderate rebels’ and their supporers from eastern Aleppo showed their real face one more time. Encouraged by the Jabhat Fatah al-Sham (formerly Jabhat al-Nusra, the Syrian al-Qaeda branch) attack on the Syrian government forces in western Aleppo, they confirmed their support to al-Nusra, wayving the terrorist group’s flags and symbols.

If there was some ‘moderate opposition’ in eastern Aleppo, it remained silent. 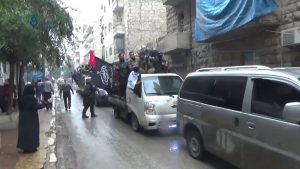 [FF Editorial: So, why is the Obama/Killary criminal regime paying Muslims to kill Muslims and using what was once their arch enemy “Al Qaeda” and its affiliates to do the dirty work? But, many Muslims throughout the world under the Saudi Wahhabists’ influence are supporting such a treacherous scam. And many want Killary to be the next President of the USA!]