TRUMP vs CLINTON: CHOOSE YOUR POISON TRUMP vs CLINTON:  CHOOSE YOUR POISON

By a Trump Supporter

who prefers lewdness to mass murder?

The “revelation” that Donald Trump made lewd remarks about women is being treated by the controlled media as if it were the end of his campaign—as if his throwaway all-too-common lewdness is somehow worse than Hilary Clinton’s track record of promoting mass murder, illegal international wars, and the deaths of over a million Iraqis, Afghans and Syrians.

Trump’s remarks, as disgraceful as they are, at the end of the day are just lewd jokes, and have not resulted in a single person’s death or injury.

Clinton, however, as U.S. Senator, voted in 2003 in favor of George Bush’s war against Iraq—launched and based on outrageous and obvious lies produced by the Jewish lobby which claimed that Saddam Hussein had “weapons of mass destruction” and was responsible for the 9-11 attacks on America.

According to a report issued by the Opinion Research Business (ORB), in 2007, an estimated 1,033,000 violent deaths resulted from that war in Iraq. The ORB reported that “48 percent of those killed died from gunshot wounds, 20 percent from the impact of a car bomb, 9 percent from aerial bombardment, and 6 percent from another blast/ordnance.”

At the same time, the U.S. military suffered 4,497 deaths, and 32,222 wounded—most of those of an extremely serious nature, including lost limbs, brain damage, and other “life-changing injuries.”

The cost of the war in Iraq was estimated to be in excess of $2 trillion—that is, 11 percent of the U.S.’s annual Gross Domestic Product—a staggering amount to be spent on a war based on lies and deceit.

Clinton’s record as Secretary of State under Obama was no less murderous. She supported the Obama administration’s reversal of its plans to withdraw all troops from Afghanistan, and in 2009, Clinton stood with Defense Secretary Robert Gates, a Republican, and called for thirty thousand more troops in Afghanistan.

At the time it was claimed that the surge “was to stabilize Afghanistan, turn back the Taliban, and bring the war to an end.” Of course, nothing of the sort happened. Now, partly thanks to Clinton, the war in Afghanistan has become America’s longest war ever.

In Libya, Clinton supported aggressive war against that country’s leader, and asserted the “right” of the U.S. government to intervene in any country of its choosing. The resulting war in that country plunged Libya into chaos, killed thousands more, and helped create the ongoing Third World invasion of Europe.

As Secretary of State, Clinton was also an enthusiastic supporter of Barack Obama’s decision to increase drone warfare in Pakistan, Yemen, and Somalia.

In her memoir Hard Choices, Clinton writes that the secret drone strikes quickly became “one of the most effective and controversial elements” of the “war on terror” under the Obama administration, “but in 2009 all I could say was ‘No comment’ whenever the subject came up.”

Thousands of civilians have been killed in these drone strikes, a fact admitted by the U.S. government itself. In an investigative report entitled “The Drone Papers,” the Intercept’s Jeremy Scahill showed that the drone strikes murdered innocent people indiscriminately, using one campaign in northeastern Afghanistan, “Operation Haymaker,” as an example.

Beginning in 2011, through a secret arrangement with the CIA, the State Department was given the power to approve drone strikes instead of the president, as was previously the case. Clinton was given personal permission to “save time” in the authorization process, and she was allowed to give the green light for strikes straight from her cell phone. 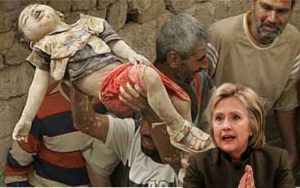 “Kill ’em!” she says, and innocent children die on her orders.
Not for nothing is this psychotic woman known as “Killary”.

In spite of this public record of mass murder and mayhem, the controlled media never focuses on Clinton’s bloodthirsty past or her plans to plunge America into new wars—and instead chooses to focus on Trump’s lewd comments of over ten years ago as if they are the greatest sin yet seen.

The bias and hypocrisy is obvious—and will be subverted by the Internet’s ability to bypass the controlled media.

The noise being caused by the media’s attention to Trump’s lewd remarks will certainly win him no friends, but will not affect his support base. For most of them, the choice has already been made, and they will continue to support a crude joker over a proven supporter of mass murder whose hands are stained with blood.

LD (update) : We learn today from a leaked email that Hillary Clinton has fawned at the feet of the Rothschilds, begging for their forgiveness. “Let me know what penance I owe you,” she says to Lady de Rothschild, gushing further: “You are the best! Sweet dreams! I remain your loyal adoring pal.” The question naturally arises: who rules America? Can it be the Rothschilds?