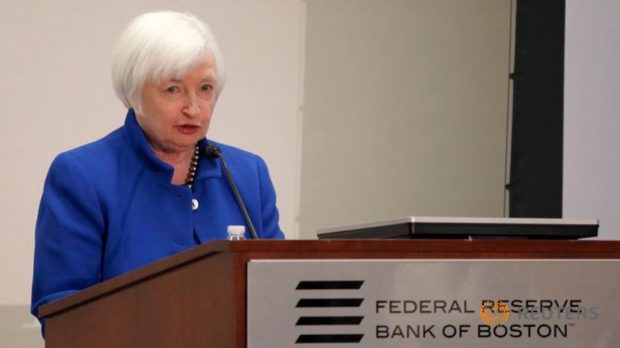 BOSTON – The Federal Reserve may need to run a “high-pressure economy” to reverse damage from the 2008-2009 crisis that depressed output, sidelined workers, and risks becoming a permanent scar, Fed Chair Janet Yellen said on Friday in a broad review of where the recovery may still fall short.

Though not addressing interest rates or immediate policy concerns directly, Yellen laid out the deepening concern at the Fed that U.S. economic potential is slipping and aggressive steps may be needed to rebuild it.

Yellen, in a lunch address to a conference of policymakers and top academics in Boston, said the question was whether that damage can be undone “by temporarily running a ‘high-pressure economy,’ with robust aggregate demand and a tight labor market.”

“One can certainly identify plausible ways in which this might occur,” she said.

Looking for policies that would lower unemployment further and boost consumption, even at the risk of higher inflation, could convince businesses to invest, improve confidence, and bring even more workers into the economy.

Yellen’s comments, while posed as questions that need more research, still add an important voice to an intensifying debate within the Fed over whether economic growth is close enough to normal to need steady interest rate increases, or whether it remains subpar and scarred, a theory pressed by Harvard economist and former U.S. Treasury Secretary, Lawrence Summers, among others.

Her remarks jarred the U.S. bond market on Friday afternoon, where they were interpreted as perhaps a willingness to allow inflation to run beyond the Fed’s 2.0 percent target. Prices on longer dated U.S. Treasuries, which are most sensitive to inflation expectations, fell sharply and their yields shot higher.

The yields on both 30-year bonds and 10-year notes ended the day at their highest levels since early June, and their spread over shorter-dated 2-year note yields widened by the most in seven months.

Jeffrey Gundlach, chief executive of DoubleLine Capital, said he read Yellen as saying, “‘You don’t have to tighten policy just because inflation goes to over 2 percent.’

“Inflation can go to 3 percent, if the Fed thinks this is temporary,” said Gundlach, who agreed Yellen was striking a chord similar to Summer’s “secular stagnation” thesis. “Yellen is thinking independently and willing to act on what she thinks.”

While investors by and large think the Fed is likely to raise interest rates in December this year, in a nod to the country’s 5.0 percent unemployment rate and expectations that inflation will rise, they do not see the Fed moving aggressively thereafter.

“This is a clear rebuttal of the hawkish arguments,” to raise rates soon, a line of argument pitched by some of the Fed’s regional bank presidents, said Christopher Low, chief economist at FTN Financial.

Boston Federal Reserve Bank president Eric Rosengren, who is hosting the conference at which Yellen spoke, was one of three policymakers who dissented at the Fed’s September policy meeting and argued for an immediate increase in interest rates. He feels a slight increase now will keep job growth on track and prevent a faster round of rate increases later.

But in a speech earlier on Friday Rosengren also referred to the economy as “nonconformist” because of its slow growth, and the general mood at the conference was that the sluggishness is largely the result of forces like aging and demographics that are unlikely to change.

“We may have to accept the reality of low growth,” said John Fernald, a senior research at the San Franciso Fed. “Potential is really low.”

That sort of assessment could figure importantly in coming debates over rate policy, and over whether support is building at the Fed to risk letting inflation move above its 2.0 percent target in order to employ more workers and perhaps encourage more investment. It could even impact the central bank’s willingness to put more aggressive monetary policies back into play if the economy slows.

“If strong economic conditions can partially reverse supply-side damage after it has occurred, then policymakers may want to aim at being more accommodative during recoveries than would be called for under the traditional view that supply is largely independent of demand,” Yellen said. It would “make it even more important for policymakers to act quickly and aggressively in response to a recession, because doing so would help to reduce the depth and persistence of the downturn.”

From low inflation to the effect of low interest rates on spending, Yellen’s remarks demonstrated how little in the economy has been acting as the Fed expected.

With public expectations about inflation so hard to budge, Yellen said tools like forward guidance, “may be needed again in the future, given the likelihood that the global economy may continue to experience historically low interest rates, thereby making it unlikely that reductions in short-term interest rates alone would be an adequate response to a future recession.”