Exoneration Can Now Change Everything

Exoneration Can Now Change Everything 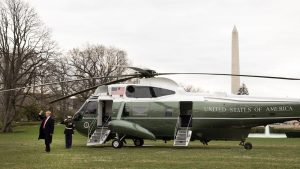 President Donald J. Trump waves as he walks across the South Lawn of the White House Friday morning, March 22, 2019, to board Marine One for the start of his trip to Palm Beach, Fla., where he will meet with Caribbean leaders. (Official White House Photo)

President Donald Trump correctly called the “legal” events of this past weekend his exoneration, and it can now lead to very profound changes in a national and world situation which was becoming extremely dangerous.

The President’s attorney Rudy Giuliani immediately spoke of getting to “the name of the person who started this”. We know that the now-exploded ‘Russia-gate’ was started from British GCHQ signals intelligence and MI6 foreign intelligence in 2015, a network run by Sir Richard Dearlove and Sir Andrew Wood; the President and his attorney know the attack was British. Therefore a focused counter-investigation led from the White House will blow up the U.S.-British “special relationship” and British war and Cold War policies. It would end the geopolitical war-confrontation policy London has dragged Trump into through relentless, McCarthyite “Russia-gating,” led on the ground shamefully by leading Democrats — the new, true “neo-Cons”.

President Trump could become relatively much freer to pursue the policy what he has spoken for but been blocked from doing, cooperating with other great powers — particularly Russia and China — for peace. And perhaps even for the development of previously war-wracked regions.

Best of all, this sudden shift has started just as internationally, the new paradigm of economic and scientific progress epitomized by China’s Belt and Road Initiative of great infrastructure projects, is expanding in Asia, in Africa and Latin America, and now in Europe with the new Italy-China agreement.

But the LaRouche movement — which first traced this disgraceful attack on the Presidency to British intelligence, and drove this crucial truth home — must take the lead in these changes. Not only has it been fighting for the economic changes to make this possible, beginning with Glass-Steagall bank separation and Hamiltonian national credit, and for scientific breakthroughs in nuclear power and space exploration rather than “greenie” radical pessimism.

More at the heart of the matter: The prosecutions and media persecution of Lyndon LaRouche and his movement set up the United States for three decades of deindustrialization, cultural demoralization and war. They deprived it of the economic and strategic leadership LaRouche represented against the financial crashes he forecast so accurately, and deprived it of the great projects and scientific advances he designed for so many regions of the world.

And those who organized the attacks on him, were precisely those his movement has now exposed again in “Russia-gate” — British intelligence who feared his threat to the Royal Family’s “eco-fascism”; Anglophiles here like Henry Kissinger who in official bodies demanded LaRouche’s prosecution; Wall Street bankers; above all, the national liberal media.

LaRouche must now be exonerated, as now demanded by a national petition drive, to exonerate and free the country for his ideas. And it is President Trump who could be freed to exonerate LaRouche, and free himself to act as he intended in the White House.

Schiller Institute president Helga Zepp-LaRouche, speaking to those organizing this effort today, said, “Obviously, it has to lead to the British. Do Trump, and Giuliani, and these people know that it was British intelligence? You can be 100% sure that they do. But obviously, it is absolutely up to us to accelerate this campaign, and the best way to do that is to push for the exoneration of Lyn, because as we have said many times, it was exactly the same apparatus which is now caught in perpetrating a coup attempt against the President of the United States — and failing in it — who were behind the legal prosecution of Lyn and his associates, and who were behind the cover-up of 9/11. And these people, they have to be brought to justice, and also Lyn has to be exonerated: Because as long as there is this state that there was any legitimacy to what was done to Lyn, people will be blocked from having access to his ideas.