A dollar shortage seems implausible in a world where the Fed printed $4.4 trillion. But while the Fed was printing, the world borrowed over $70 trillion (on top of prior loans), so the dollar shortage is real. The math is inescapable.“

The great Chinese growth slowdown has been proceeding in stages for the past two years. The reason is simple. Much of China’s “growth” (about 25% of the total) has consisted of wasted infrastructure investment in ghost cities and white elephant transportation infrastructure. 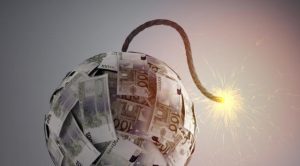 That investment was financed with debt that now cannot be repaid. This was fine for creating short-term jobs and providing business to cement, glass and steel vendors, but it was not a sustainable model since the infrastructure either was not used at all or did not generate sufficient revenue.

China’s future success depends on high-value-added technology and increased consumption. But shifting to intellectual property and the consumer means slowing down on infrastructure, which will slow the economy.

In turn, that means exposing the bad debt for what it is, which risks a financial and liquidity crisis. China started to do this last year but quickly turned tail when the economy slowed. Now the economy has slowed so much that markets are collapsing.

But doesn’t China have over $1 trillion of reserves to prop up its financial system?

On paper, that’s true. But in reality, China is “short” U.S. dollars. The Chinese may have $1.4 trillion of U.S. Treasury securities in its reserve position, but they need those assets possibly to bail out their banking system or defend the yuan.

Meanwhile, the Chinese banking sector, which in many ways is an extension of the state, owes $318 billion in U.S. dollar-denominated deposits of commercial paper.

From a bank’s perspective, borrowing in dollars is going short dollars because you need dollar assets to back up those liabilities if the original lenders want their money back. For the most part, the banks don’t have those assets because they converted the dollar to yuan to prop up local real estate Ponzis and local corporations.

There’s not much left over to bail out the corporate, individual and real estate sectors.

This is all part of a global “dollar shortage” attributable to Fed tightening, both in the forms of higher rates but also a reduction in base money.

A dollar shortage seems implausible in a world where the Fed printed $4.4 trillion. But while the Fed was printing, the world borrowed over $70 trillion (on top of prior loans), so the dollar shortage is real. The math is inescapable.

So the Chinese debt bomb that has been a long time in the making is finally getting ready to explode. The economy is slowing, debt is exploding and the trade war with Trump has hurt China’s exports needed to earn dollars to pay the debts.

The defaults are beginning to pile up. Several large corporations and regional governments have defaulted recently.

Of course, this solution is strictly temporary. All it does is postpone the day of reckoning and make the debt crisis worse when it does arrive.

With every passing day, a Chinese financial collapse draws closer. The rest of the world will not escape the consequences.

When the crisis strikes in full force, possibly in 2019, the rest of the world will not be spared.